From Fan Boys to Like Her Father, here is the best list of Kristen Bell Movies and TV Shows. 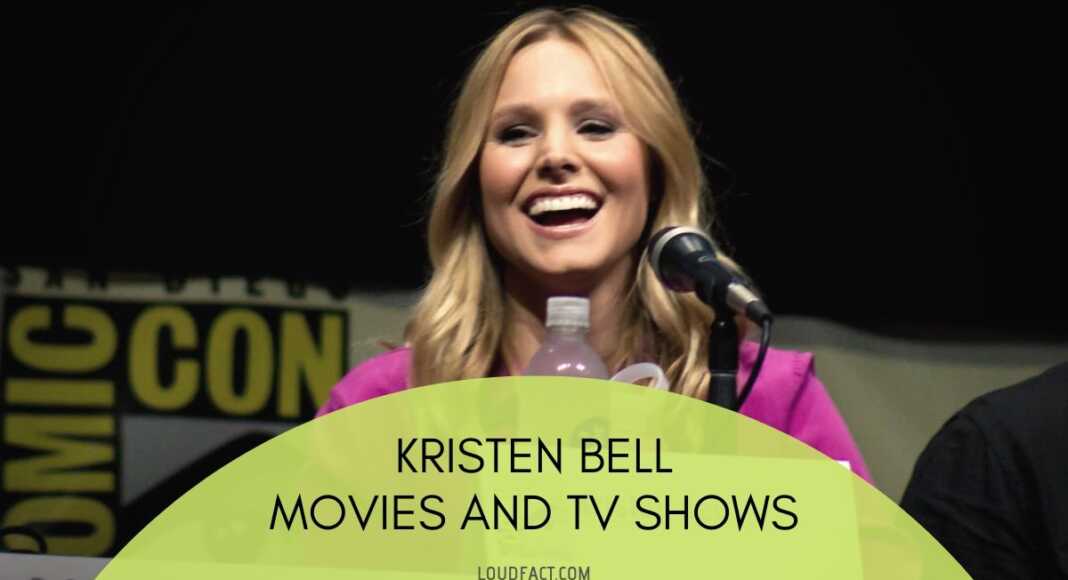 Looking for the best Kristen Bell movies and tv shows to watch this weekend? Kristen Anne Bell is an American actress who began her acting career starring in stage productions and attended the Tisch School of Arts in New York.

Among all Kristen Bell movies and tv shows, she has earned recognition for her debut Broadway role as Becky Thatcher in the musical ‘The Adventures of Tom Sawyer’ and made her first significant film appearance in ‘Spartan’ (2004).

In Veronica Mars, her portrayal of the titular character earned her critical acclaim. She was then cast in the main role in ‘Heroes’ (2007-08) and voiced the eponymous narrator in ‘Gossip Girl’ (2007-12).

Here is the complete list of the best Kristen Bell movies and tv shows that are worth watching.

This Kristen Bell movie is one of the best-recommended movies to watch. The movie tells the story of a successful writer(Greg Kinnear) who has not worked since his wife left him for another man. He tries to reconnect with his two children (Lily Collins, Nat Wolff) after his divorce.

Forgetting Sarah Marshall is one of the best among all Kristen Bell movies and tv shows. This movie starts with Peter Bretter who decides to go for a Hawaiian vacation after his break-up with Sarah. He is in for a rude shock when he finds out that Sarah has checked in at the same resort as him.

A disaffected magazine intern (Aubrey Plaza) befriends an unusual guy (Mark Duplass), who is looking for a companion to accompany him on a trip back through time.

Spartan is one of the Kristen Bell movies and tv shows where President’s daughter, Laura Newton(Kristen Bell), is kidnapped by a human trafficking ring, and high-ranking Secret Service agent Robert Scott(Val Kilmer) takes on the case.

With the support of his protégé, Curtis(Derek Luke), Robert begins investigating, but the operation is called off when Laura is reported dead. However, Robert and Curtis, who have found evidence to the contrary, continue their search, and soon find evidence of an elaborate government cover-up.

Fanboys is one of the best comedy films among Kristen Bell movies and tv shows which stars Kevin Smith. When four die-hard fans of ‘Star Wars’ have a reunion, they discover that one of them is dying. They decide to steal a print of an unreleased ‘Star Wars’ film so that their dying friend can watch it.

When a family of grey whales finds themselves in trouble, a reporter, his ex-girlfriend, and a couple of other rival groups join forces to rescue them.

Ali leaves her job as a waitress to pursue a career on stage. After failing the audition, she walks into a club where, after a long struggle, she not only becomes a lead dancer but also a singer. If you are looking for a musical movie that stars Kristen Bell, then Burlesque is the movie you should watch.

Get Him To The Greek is probably the funniest movie among all Kristen Bell movies and tv shows. The movie narrates the story of an aspiring executive at a record company, Aaron Green(Jonah Hill) who gets what looks like an easy assignment.

He must escort British rock legend Aldous Snow(Russell Brand) to L.A.’s Greek Theatre for the first stop on a lucrative comeback-concert tour. Learning his true love is in California, the rocker pledges to win her back before starting the tour, forcing Aaron to pull out all the stops to get Snow on stage in time.

Amy(Mila Kunis) has a great husband, overachieving children, a wonderful home, and a successful career. Unfortunately, she’s also overworked, exhausted, and ready to snap. Fed up, she(Kristen Bell) joins forces with two other stressed-out mothers(Kristen Bell, and Kathryn Hahn) to get away from daily life and conventional responsibilities.

As the gals go wild with their newfound freedom in this best Kristen Bell movie, they set themselves up for the ultimate showdown with PTA queen bee Gwendolyn and her clique of seemingly perfect moms.

At the end of her book tour, Sidney visits her hometown after ten long years. As she catches up with old friends, her return brings back memories and beckons the return of Ghostface.

Left at the altar, a young executive takes her Caribbean honeymoon cruise with the last person she ever presumed which is her estranged father. Although they depart as strangers, they soon gain a new appreciation for love, life, family, and each other.

Hit and Run is one of the Kristen Bell movies and tv shows where a driver jeopardizes his Witness Protection Program to protect his girlfriend. He then finds himself being chased by the officials and his past to catch up with him.

Jon Baker and Frank “Ponch” Poncherello have just joined the California Highway Patrol in Los Angeles, but for very complex reasons. Baker is a former motorbike rider who’s trying to put his life and marriage back together.

Poncherello is a cocky, undercover FBI agent who’s examining a multimillion-dollar heist that may be an inside job. Compelled to work together, the inexperienced rookie and hardened veteran begin clashing instead of clicking while trying to nab the bad guys.

Looking for a romantic comedy among all Kristen Bell movies and tv shows then How To Be A Latin Lover is exactly the movie you are looking for.

Maximo gets the surprise of his life when his wealthy, 80-year-old wife dumps him for a younger car salesman. Forced out of his house, he must now move in with his estranged sister Sara and her nerdy but adorable son Hugo. Eager to return to the lap of luxury, Maximo hatches a scheme to seduce a widowed billionaire and live a high life once again.

Marni, a successful woman, is shocked to discover that her brother is marrying the school bully from her past. When she tries to expose her, things do not go as planned.

A reporter(Kristen Bell) quits her job, returns to her old lifeguard duties, and has an affair with a teenager.

Roman is a drama thriller starring Kristen Bell where obsession takes a darker turn when a lonely recluse(Lucky McKee) meets the woman(Kristen Bell) of his dreams.

Four couples who are out on a holiday head to a resort. They all enroll in couples-only therapy and realize faults in their perfect marital lives.

Disappointed with romance, Beth, an ambitious New Yorker (Kristen Bell), goes to Rome, where she plucks magic coins from a special fountain. The coins attract an assortment of odd suitors, including a sausage merchant, a street magician, and an artist. But when a persistent reporter (Josh Duhamel) throws his hat in the ring, Beth wonders if his love is the real thing.

Deadwood is one of the best tv shows to watch among all Kristen Bell movies and tv shows. This series is set in a mining town that was not part of any U.S. state or territory in the post-Civil War years and thus was literally lawless.

Deadwood attracts people looking to get rich after a huge gold strike, as well as those looking to capitalize on the lack of organized law in the town, built on land stolen from the Sioux.

Vic Mackey is a rogue cop in an experimental division of the Los Angeles Police Department, willing to sink to the criminals’ level to take them on, however, his misdeeds eventually come home to roost. He breaks the law to, in his mind, bring some semblance of order to a chaotic world.

Parks and Recreation is one of the most-watched Kristen Bell tv show where Leslie Knope, a mid-level bureaucrat in an Indiana Parks and Recreation Department, wishes to beautify her town(and boost her own career) by supporting local nurse Ann Perkins to turn an abandoned construction site into a community park.

However, what should be a fairly simple project is stymied at every turn by oafish bureaucrats, selfish neighbors, governmental red tape, and a myriad of other challenges.

Leslie’s colleague Tom Haverford, who delights in exploiting his position for personal gain, is as likely to undermine her efforts as to help her, while her boss, Ron Swanson, is adamantly opposed to government in any form, even though he’s a bureaucrat himself.

Veronica Mars used to be the popular girl with cool friends and the jock’s boyfriend. A series of personal and family shocks have made her an outcast – albeit one with a sarcastic side and a snarky sense of humor. Now, she helps her private investigator father dig into the lives of the rich and famous in the messed-up town of Neptune, Calif.

When over-achieving medical resident Liv Moore attends a party that turns into a zombie-feeding frenzy, she ends up joining the ranks of the living dead. Decided to pass as human despite her pale appearance and newly listless demeanor, Liv forms a plan to resist her drive to consume fresh human brains by taking a job at a coroner’s office, where she can secretly snack on the brains of corpses delivered there.

Quickly discovering that she absorbs the memories of those she feeds on, she finds a new purpose by posing as a psychic and working with a detective to help solve their murders.

Heroes is one of the most famous TV shows among all Kristen Bell movies and tv shows where ordinary people worldwide discover they have superpowers. Their lives intertwine as they work together to prevent a catastrophic future.