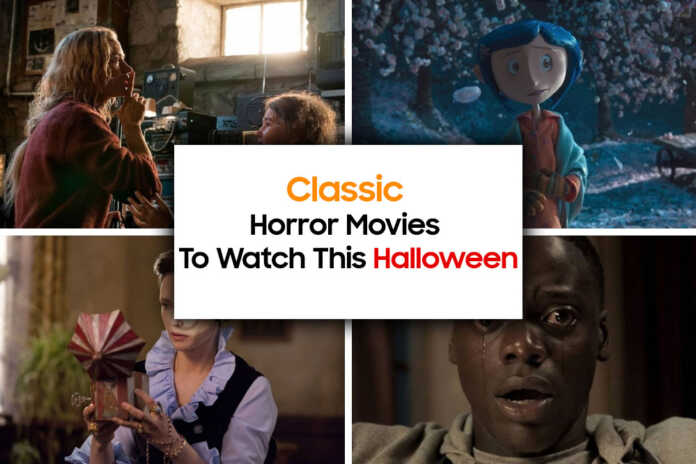 With Halloween season, it’s almost the best time of the year to enjoy some of the great classic horror movies! Despite all the fire burn, pumpkin and ghosts, monsters, haunted houses, haystack rides, and corn mazes, there’s nothing that gets you in a spooky seasonal mood quite like your favorite classic horror movies. If you’re looking for something different to watch in this Halloween season then check out our recommendations below.

Whether you’re planning to watch on Netflix, iTunes or Amazon, gather up the kids for a post trick or treat movie fest, or host an adults-only movie party for our favorite movie recommendations.

It’s not much time passed since A Quiet Place replaced by others on theaters. Directed by John Krasinski, this movie shows the post-apocalyptic world where terrifying creatures stalk humans. These creatures are drawn to sounds, so the key is to live in silence in order to survive.

Directed by Bill Melendez, it’s the best movie to watch with the family. Blanket-bearing Linus waits up for the Great Pumpkin while Charlie Brown frets about going to a Halloween party. Writer Charles M. Schulz also got nominated for Special Classifications of Individual Achievements in Primetime Emmy Awards 1967.

Directed by Henry Selick, this stop-motion movie shows an adventurous 11-year-old girl, Coraline, who finds another parallel world that is a strangely idealized version of her frustrating home.

Because of amazing its amazing stop-motion animation, this movie was nominated for many awards. If you are looking for something to watch with your kids then this is the perfect movie to select among others.

This movie delivers true horror and one of them out of the box movie with very interesting and subtle storytelling. Instead of ghosts or spirits, this movie contains the very elements which generate terrifying feelings.

Written and Directed by Jordan Peele, this movie narrates the story of a young African-American who visits his white girlfriend’s parents for the weekend where he finds out some terrifying secrets about them.

The Ring is the remake of the Japanese hit movie Ringu, where Naomi Watts plays the role of a journalist who investigates a mysterious videotape. The rumor around the videotape was it will kill anyone who watches it seven days after they have seen it. Directed by Gore Verbinski this movie has won various awards worldwide.

This movie is known to most horror movie lovers because of its popularity. The movie follows paranormal investigators Ed and Lorraine Warren who help a family to fight a possessed house. Directed by James Wan, this movie has won 15 awards.

Directed by Drew Goddard, this movie follows a stereotypical group of friends(five friends) who go for a break at a remote cabin. This movie is among the most popular movies in 2012 and has won 20 awards for different categories.

Directed by auteur John Carpenter, this movie is one of the best classic movies to watch. Halloween tells the story of a child psychopath Michael Myers. He has locked away because of murdering his 15-year-old sister at the age of just 6. The presence of stars like Donald Pleasence, Jamie Lee Curtis, Tony Moran makes this movie a must-watch.