From Aquamarine to America's Sweethearts, here is the best list of Emma Roberts movies and tv shows. 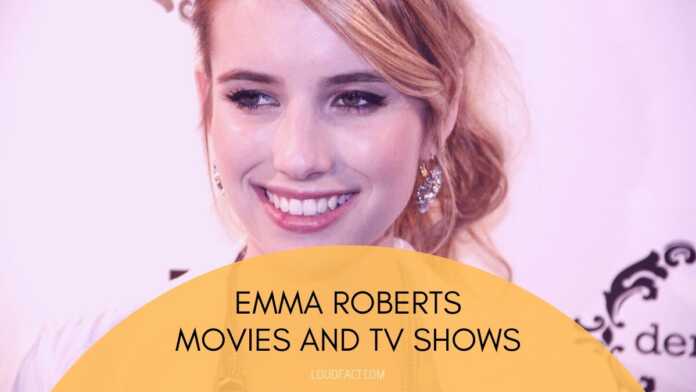 Looking for crime/drama movies to watch this weekend? Then Emma Roberts movies and tv shows are exactly what you are looking for. Emma Rose Roberts is an American actress and singer. She began her acting career with ‘Blow,’ a crime film where he portrayed Kristina Jung.

Among all Emma Roberts movies and TV shows, she gained recognition for her lead role as Addie Singer on the Nickelodeon television series Unfabulous. She has appeared in various movies, including It’s Kind of a Funny Story, Nancy Drew, Hotel For Dogs, The Art of Getting By, Wild Child, and Valentine’s Day.

Here is the complete list of the best Emma Roberts movies and tv shows that are worth watching.

Looking for the best among all Emma Roberts movies and tv shows, then Blow is the one which you are looking for. Having grown up amidst absolute poverty, George Jung becomes a cocaine peddler to make money. While this makes him rich, he meets obstacles that lead to his fall from power.

It’s Kind of a Funny Story is one of the best among all Emma Roberts movies and tv shows where Craig checks into a psychiatric ward when he understands that he is suicidal. He undergoes a transformation as he comes across people less fortunate than him.

We’re The Millers is one of the Emma Robert crime-comedy movies where David, a drug dealer, is forced by his boss to smuggle drugs from Mexico. He hires a stripper, a petty thief, and a teenage neighbor and forms a fake family to assist him to smuggle the drugs.

In 1979, a Long Island town falls into a panic when Charlie Bragg(Timothy Hutton), a hapless husband and father, is diagnosed with Lyme Disease. His wife, Melissa(Cynthia Nixon), takes a job working for their womanizing next-door neighbor, Mickey Bartlett(Alec Baldwin), whose philandering ways are no secret to his wife(Jill Hennessy).

Industrious high school senior Vee Delmonico(Emma Roberts) is tired of living life on the sidelines. Pressured by her friends, Vee decides to join Nerve, a popular online game that challenges players to accept a series of dares.   It’s not long before the adrenaline-fueled competition requires her to perform increasingly dangerous stunts. When Nerve begins to take a sinister turn, Vee finds herself in a high-stakes finale that will ultimately determine her entire future.

The Art of Getting By is one of the recommended Emma Roberts movies and tv shows where George, a lonely artist, doesn’t believe in school life and avoids going there. He meets Sally, a popular girl, and now has a reason to attend school.

Longtime sweethearts Celeste(Rashida Jones) and Jesse(Andy Samberg) married young, but are now drifting apart. Celeste is an ambitious business owner, while Jesse has a more laid-back attitude toward life and work.

Celeste wants a divorce and believes that she and Jesse can remain friends. Jesse passively goes along with her plans, even though he is still in love with her. However, as the reality of their separation sinks in, Celeste begins to have second thoughts.

This Emma Roberts movie has all the popular names including Sam Rockwell, Rooney Mara. The Winning Season shows the story of an alcoholic, Bill Greaves who gets an opportunity to bring his life back on track when a friend, Terry, offers him a job to coach a high school girls basketball team.

Ashby is one of the Emma Roberts movies and tv shows where Ed Wallis, a high school student, befriends his neighbor, Ashby, a retired CIA assassin, who is terminally ill. But their relationship takes a turn when Ashby decides to kill three old bosses.

At the end of her book tour, Sidney visits her hometown after ten long years. As she catches up with old friends, her return not only brings back memories but also beckons the return of Ghostface.

This Emma Robert movie narrates the story of a lack of parental guidance, which encourages teens in an affluent California town to rebel against substance abuse and casual sex.

Evan Peters and Emma Roberts both acted together in this movie. An aspiring poet (Emma Roberts) takes a job as a clerk at an adult bookstore and tries to make her contemptuous literary idol (John Cusack) take her on as his protege.

Wild Child is one of the Emma Roberts movies and tv shows where a rebellious Malibu princess is sent off to a strict English boarding school by her father. Unwilling to accept the strict regime, she decides to misbehave, in the hope of being dismissed from school.

Nancy Drew is one of those Emma Roberts movies and tv shows where she acted as a teenage detective, accompanies her father to Hollywood on a business trip. There, she discovers the murder of a film star and decides to investigate the killing.

Four estranged friends Jo, Cassandra, Kerry, and Shannon come face-to-face after they ignorantly get embroiled in a diamond racket. With a group of thugs on the chase, will they be able to escape?

During the dead of winter, a troubled young woman(Emma Roberts) embarks on a mysterious journey to an isolated prep school where two stranded students(Kiernan Shipka, Lucy Boynton) face a sinister threat from an unseen evil force.

Valentine’s Day is one of those Emma Roberts movies and tv shows where several couples face various struggles related to their love lives while others try their best to find love.

For an awkward, self-conscious girl like Kiki(Julia Roberts), being the personal assistant to a beautiful megastar like Gwen(Catherine Zeta-Jones) isn’t easy. But when she dutifully accepts the task of helping Gwen and her estranged husband Eddie(John Cusack) make it through one last public appearance masterminded by legendary press agent Lee Phillips (Billy Crystal), forever devoted Kiki finds that her job is about to get even harder when she and Eddie’s relationship takes a romantic turn.

Twelve is of the Emma Roberts movies and tv shows where the story revolves around a high school dropout who turns into a drug dealer but life becomes sour when his cousin is brutally murdered and his best friend is arrested for the crime.

Aquamarine is one of those Emma Roberts movies and tv shows where a mermaid becomes stranded at a beach resort and falls in love with a lifeguard. She enlists the aid of two local girls in winning his heart.

American Horror Story is one of the best tv shows on the list of Emma Roberts movies and tv shows. In the year 1952, a troupe of people in Jupiter, Florida, that works for a freak show has to deal with danger in the form of Twisty the Clown, a grisly serial killer.

Teens Drake and Josh couldn’t be more different, and now that they’ve become stepbrothers and live in the same house, those differences are all the more obvious. With separate friends and aspirations in high school, the new siblings have unpredictable days and hilarious adventures while getting used to being family.

Scream Queens is one of the Emma Roberts movies and tv shows where the girls of Kappa Tau have left the hallowed halls of Wallace University behind in favor of another institution, this one with a medical bent.

Having moved past the events at their sorority house, the remaining Channels and Zayday have begun training to be physicians in a hospital recently acquired by Cathy Munsch, their former dean, where they are joined by Chad Radwell, and a couple of handsome new faces — secretive head surgeon Dr. Brock Holt and Dr. Cassidy Cascade, who suffers from a strange medical condition.

Unfabulous is yet another Emma Robert tv show where Addie Singer is trying to fit in at school but always seems to end up in embarrassing situations. Her best friends Geena and Zack, and her parents support her through junior high. Whenever Addie isn’t quite sure what to do she writes and sings songs to express how she feels.