From Gold to Free State of Jones, here are the best Matthew McConaughey movies and tv shows. 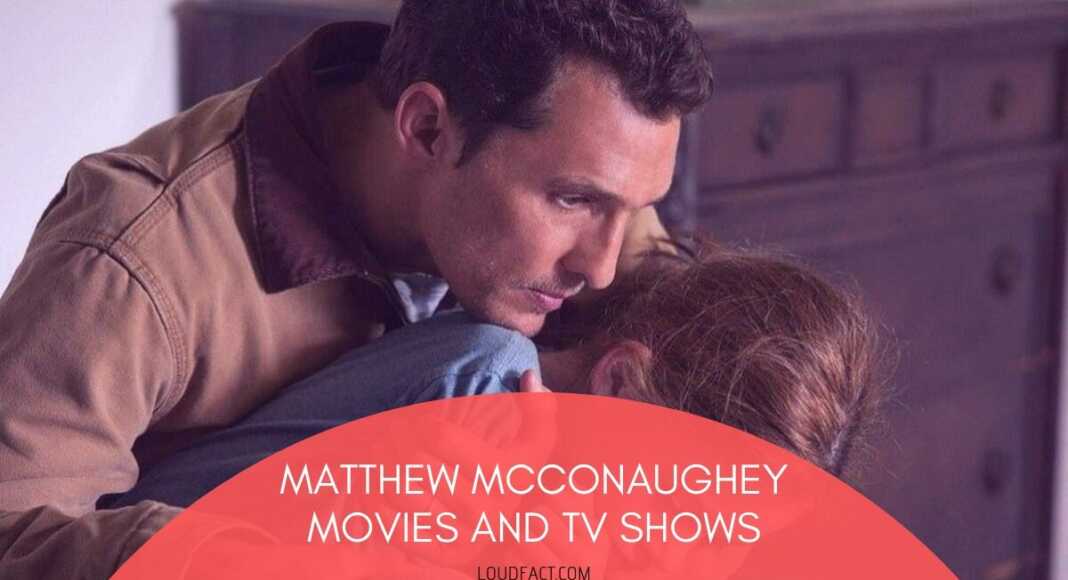 Are you looking for the best Matthew McConaughey Movies and TV Shows to watch this weekend? Matthew David McConaughey(Matthew McConaughey) is an American actor, director, producer, and writer. He first gained notice for his breakout role in the coming-of-age comedy Dazed and Confused.

Here is the complete list of the best Matthew McConaughey movies and tv shows that are worth watching.

Some of his best roles came in more recent films which are the ‘Academy Award’-winning role as Ron Woodroof in the biographical film ‘Dallas Buyers Club’ (2013), Emmy nominated role in the crime-drama series ‘True Detective’ (2014), and astronaut Cooper in Christopher Nolan’s top-grossing sci-fi film ‘Interstellar’ (2014).

Directed by Christopher Nolan this Sci-Fi movie is the best movie among all Matthew McConaughey movies and tv shows. In the future, Earth is slowly becoming uninhabitable. Ex-NASA pilot Cooper, along with a team of researchers, is sent on a planet exploration mission to report which planet can sustain life.

Ron, a rodeo cowboy, is diagnosed with AIDS. He discovers a banned drug that can help AIDS patients survive longer. He smuggles the drug and sells it to other patients and forms a buyer’s club.

Defense lawyer Mick Haller lands a case defending a wealthy realtor’s son who is accused of raping a prostitute. Believing his client to be innocent, Haller soon finds evidence that proves otherwise.

The Wolf Of Wall Street needs no introduction. This Leonardo DiCaprio movie is one of the best movies to watch among all Matthew McConaughey movies and tv shows. Introduced to life in the fast lane through stockbroking, Jordan Belfort takes a hit after a Wall Street crash. He teams up with Donnie Azoff, cheating his way to the top as his relationships slide.

After his ten-year-old daughter is raped, Carl murders her perpetrators. He then faces a trial and calls upon his friend Jake Tyler, a lawyer, to help him win the case.

Free State Of Jones is another great addition to the list of Matthew McConaughey movies and tv shows. In 1863, Mississippi farmer Newt Knight serves as a medic for the Confederate Army. Opposed to slavery, Knight would rather help the wounded than fight the Union. After his nephew dies in battle, Newt returns home to Jones County to safeguard his family but is soon branded an outlaw deserter.

Forced to flee, he finds refuge with a group of runaway slaves hiding out in the swamps. Forging an alliance with the slaves and other farmers, Knight leads a rebellion that would forever change history.

In 1970, Marshall University and the small town of Huntington, W.Va., reel when a plane crash claims the lives of 75 of the school’s football players, staff members, and boosters. New coach Jack Lengyel (Matthew McConaughey) arrives on the scene in March 1971, determined to rebuild Marshall’s Thundering Herd and heal a grieving community in the process.

This Matthew McConaughey comedy movie is well known for its popular star cast. In 1976 Texas, a bunch of teenagers celebrates the last day of high school by hazing freshmen, partying at a local pool, indulging in drugs, and following it up with a keg party.

Mus is probably the most recommended drama movie to watch in the list of Matthew McConaughey movies and tv shows. While exploring a Mississippi River island, Arkansas boys Ellis (Tye Sheridan) and Neckbone (Jacob Lofland) encounter Mud (Mathew Mahoney), a fugitive who needs their help.

Though Mud killed a man in Texas and has bounty hunters on his trail, he is most concerned about reuniting with Juniper(Reese Witherspoon), the love of his life. Ellis, who is suffering the pangs of his first crush, agrees to help Mud. He and Neckbone do all they can to protect Mud and help him reunite with Juniper.

Set in present-day Texas, “Frailty” centers on the FBI’s search for a serial killer who calls himself “God’s Hands.” McConaughey plays Fenton Meeks, a young man who approaches the lead investigator, one night, claiming he knows the identity of the killer.

The FBI agent is curious, but unimpressed until Fenton reveals that the killer is his younger brother Adam. This is a film about faith, family, and the end of innocence.

Amistad is one of the classic drama movies to watch in the list of Matthew McConaughey movies and tv shows. In 1839, the slave ship Amistad set sail from Cuba to America. During the long trip, Cinque (Djimon Hounsou) leads the slaves in an unprecedented uprising. They have then held a prisoner in Connecticut, and their release becomes the subject of heated debate.

In this Zemeckis-directed adaptation of the Carl Sagan novel, Dr. Ellie Arroway (Jodie Foster) races to interpret a possible message originating from the Vega star system. Once the first contact with extraterrestrial intelligence is proven, Arroway contends with restrictive National Security Advisor Kitz (James Woods) and religious fanatics bent on containing the implications of such an event.

In the Texas border town of Frontera, Sheriff Sam Deeds (Chris Cooper) digs up the past when he finds an old skull in the desert. As he traces the murder of Sheriff Charlie Wade (Kris Kristofferson) 40 years earlier, Deeds’ investigation points toward his late father, the much-loved Deputy Buddy Deeds.

Ignoring warnings not to delve any deeper, Sam rekindles a romance with his high school sweetheart while bringing up old tensions in the town and exposing secrets long put to rest.

How to Lose a Guy in 10 Days is one of the best romantic comedies in the list of Matthew McConaughey movies and tv shows where Benjamin is challenged by his co-workers to make a woman fall in love with him. On the other hand, Andie has to write an article on how to lose a guy in 10 days. Will they complete their given tasks?

Kenny Wells, a prospector desperate for a lucky break, teams up with a similarly eager geologist and sets off on an amazing journey to find gold in the uncharted jungle of Indonesia. Getting the gold was hard but keeping it is even more difficult, sparking an adventure through the most powerful boardrooms of Wall Street.

True Detective is one of the best tv show on the list of Matthew McConaughey movies and tv shows to watch this weekend. Colin Farrell, Vince Vaughn, Rachel McAdams, and Taylor Kitsch star in Season 2 of `True Detective’, which weaves a web of conspiracy and betrayal around a bizarre murder in the scorched landscapes of Southern California.

The disappearance of a city manager ignites an investigation involving Ray Velcoro, a police detective torn between his job and those he serves in the Mafia; Frank Semyon, a criminal/entrepreneur in danger of losing his empire; Ani Bezzerides, a sheriff’s detective whose resolute ethics are unpopular; and Paul Woodrugh, a war veteran and highway patrol motorcycle cop with a troublesome past.

This series uses re-enactments and interviews to retell the circumstances of, well, mysteries that are unsolved. Covering crimes, tales of lost love, unexplained history and paranormal events, viewers are encouraged to call in with information that might solve the mystery.

Eastbound & Down is one of the best Matthew McConaughey movies and tv shows to watch. After substance abuse and insanely self-destructive and obnoxious behavior throw a knuckleball at his Major League Baseball career, former pitcher Kenny Powers retreats to his North Carolina hometown, where he takes a job teaching physical education at the middle school he once attended.