HMU: Facts, What does HMU Mean and How to Use It

With having 4 to 5 Million daily posts, HMU is more popular than you think. 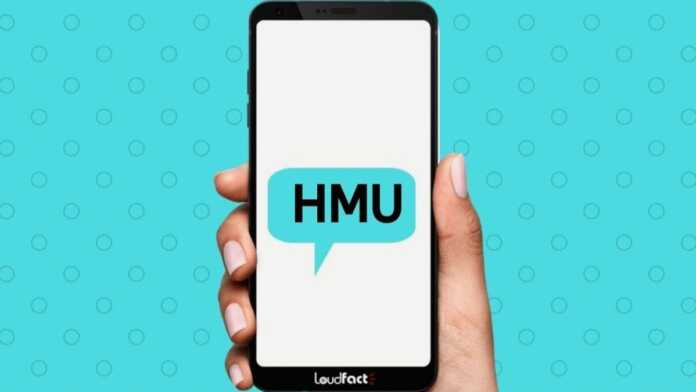 HMU: In a world largely dominated by mobile phones and instant messaging, it has become extremely difficult to keep up with all the new slangs and abbreviations. So if you have heard someone saying HMU, and then been confused about what does HMU stand for then this post will guide you through HMU meaning.

Most of us misunderstood the term HMU which is a popular abbreviation among young people, especially over text and on social media, but it is also used in everyday language by a diverse group of people.

HMU is an online acronym commonly used for the term “HIT ME UP”. It is a modern shorthand way to invite a person to communicate with you further, but just not right now.

What does HMU stand for?

‘HMU’ is one of the many new slangs invented by the text messaging community of the internet to use for the short form of “HIT ME UP”. It can also stand for “HOOK ME UP,” which is typically a request to be connected with someone or something in which you have an interest.

HMU is internet slang which may be seen used during online chatting, texting, email, and instant messaging. The HMU expression, like many other internet expressions(INB4, YH), is a part of the online conversation culture.

Like any human group behavior, language and speech expressions are utilized to build cultural identity via customized speech and special conversational expressions.

Google searches for HMU appeared in July 2011 connecting with some story of a boy who used it on a giant cardboard sign to ask out his prom date. In late 2010 and ancient 2011, some people responded to its widespread presence by humorously defining it “HOLD MY UNICORN.” This form of HMU has turned into an internet meme.

HMU used to mean “that person asked me for something,”. However, sometime in 2009, the abbreviation morphed to mean “communicate with me further.”

Undoubtedly Facebook is the biggest social media network that has millions of active users who interact with each other every day.

Facebook Messenger is one of the most famous and useful features of Facebook. This messenger offers instant chatting features which is used to send and receive messages.

Hence, HMU which stands for “Hit me up” means on facebook is to complete the situation by sending the short message on Facebook comments, groups as well as the private messenger.

What Does HMU mean on Snapchat

Snapchat is another popular social app like Facebook where Hit Me Up slang is used in chatting and tags. You will easily notice Hit Me Up in Live stories and comments. Like any other text and Facebook, the meaning of HMU on Snapchat is the same.

Instagram is more like a social app where people upload their daily activities and Selfies. On this social media network, mostly Hashtags are used and people used HMU most of the time. This makes it one of the most common acronyms for those who want to know HMU Meaning on Instagram.

Presently HMU hashtag has more than 4 to 5 Million posts which are used on Instagram each day.

HMU is usually used over text messaging or online and can be either a request or a demand. As a common abbreviation, it’s considered casual and can appear in contexts like romance, friendship, or after a successful meeting online.

As a meme, “hold my unicorn” is manageable and can be used both in response or as a single post as a playful jab at the frequently common use of abbreviations in language.

How to Use It in a Sentence

Below are a few examples of the abbreviation in common conversations:

Sheldon: Hey, you should HMU sometime.

Here it stands for “Hit Me Up”. This word means “I’m bored so you should talk/chill with me”.

Here it stands for “Hit Me Up”.