From Jurassic World to Passengers, here is the best list of Chris Pratt movies and tv shows. 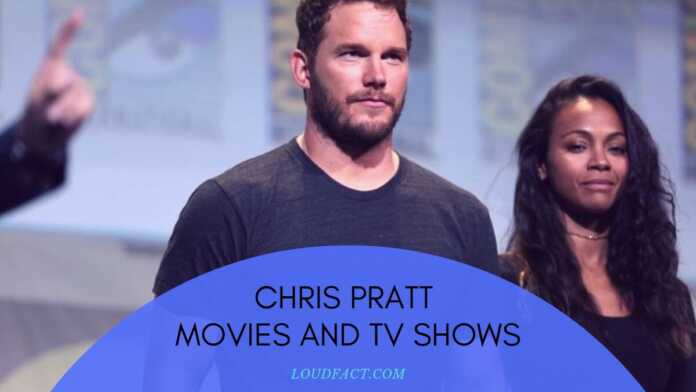 Chris Pratt made his acting debut in the short film Cursed Part 3(2000). He is best known for his roles as Owen Grady in Jurassic World, Jim Preston in Passengers and Star-Lord in Guardians of the Galaxy.

The last 17 years hasn’t been an easy road for this Minnesota-born actor as his early years in the industry were filled with struggle and failure before he could even get a whiff of success. Pratt is currently part of the Marvel Universe as Star-Lord and Jurassic World franchise as Owen.

Here is the complete list of the best Chris Pratt movies and tv shows that are worth watching.

Chris Pratt character Peter escapes from the planet Morag with a valuable orb that Ronan the Accuser wants. He eventually forms a group with unwilling heroes to stop Ronan.

Guardians of the Galaxy Vol. 2 is one of best among all Chris Pratt movies and tv shows. Peter Quill and his fellow Guardians are hired by a powerful alien race, the Sovereign, to defend their precious batteries from invaders.

When it is discovered that Rocket has stolen the items they were sent to guard, the Sovereign dispatch their armada to search for vengeance. As the Guardians try to escape, the mystery of Peter’s parentage is revealed.

A theme park showcasing genetically-engineered dinosaurs turned into a nightmare for its tourists when one of the dinosaurs escapes its enclosure. Chris Pratt’s character who is an ex-military animal expert steps up to save the day.

Iron Man, Thor, the Hulk and the rest of the Avengers unite to battle their most powerful enemy yet the evil Thanos. On a mission to collect all six Infinity Stones, Thanos plans to use the artifacts to inflict his twisted will on reality. The fate of the planet and existence itself has never been more uncertain as everything the Avengers have fought for has led up to this moment.

This is the second installment to the Jurassic World Universe where Chris Pratt returns to his character Owen Grady. With all of the wonder, adventure and thrills synonymous with one of the most popular and successful franchises in cinema history, this all-new motion-picture event sees the return of favorite characters and dinosaurs along with new breeds more awe-inspiring and terrifying than ever before.

On a routine journey through space to a new home, two passengers, sleeping in suspended animation, is awakened 90 years too early when their ship malfunctions. As Jim (Chris Pratt) and Aurora face living the rest of their lives on board, with every luxury they could ever ask for, they begin to fall for each other, unable to deny their intense attraction until they discover the ship is in grave danger. With the lives of 5,000 sleeping passengers at stake, only Jim (Chris Pratt) and Aurora can save them all.

Moneyball is one of the Chris Pratt movies and tv shows where Billy Beane, GM of Oakland Athletics, joins forces with Peter Brand, a Yale graduate, to challenge old-school selection methods and reinvent his team using a never-before-used sabermetric model.

The Magnificent Seven is one of the Chris Pratt movies and tv shows where Sam Chisolm, a warrant officer, is requested by the citizens of the town of Rose Creek to apprehend Bartholomew Bogue, a corrupt industrialist, and his ruthless gang who are terrorizing them.

Zero Dark Thirty is one of the Chris Pratt movies and tv shows where a group of CIA operatives, led by Maya, spends over a decade tracking the location of the most dreaded name in the United States of America, Osama Bin Laden.

A young man, Wesley, learns that his long lost father is an assassin. When his father is murdered, the son is recruited into his father’s old organization and trained by a man named Sloan.

Delivery Man is one of the Chris Pratt movies and tv shows where an aging slacker and former sperm donor discovers that he is the biological father of 533 children and that 142 of them have filed a lawsuit to reveal his identity.

Jake and his friends meet for the first time in ten years at a high school reunion and reminisce about the past events in their lives, realizing that they haven’t fully grown up as yet.

Tom and Violet get engaged one year after meeting. Over the next few years, their marriage keeps getting pushed due to their respective jobs until one day when they’re forced to rethink their choices.

Take Me Home Tonight is one of those Chris Pratt movies and tv shows where Matt, a young MIT graduate, works as a video clerk despite excellent job offers. His (Cris Pratt) life takes an exciting turn when he gets invited to a party by his high-school crush.

Ally suffers from the worst time of her life when her career ends after her boyfriend dumps her. She decides to get her life back on track, by finding true love from the men (Chris Pratt) she dated in the past.

Runaway Jerri Blank returns home at the age of 47 ready to pick up where she left off. This means the ex-con and former drug addict is returning to high school as a freshman. Going through adolescent doldrums and temptations is tough enough for any student, but as a middle-aged drug abuser, Jerri discovers her return to education is more challenging than she ever imagined.

In 1879 Rio and his teenage sister go on the run across the American Southwest to escape from their violent uncle. Along the way, Rio encounters the infamous outlaw Billy the Kid and the legendary lawman Pat Garrett. He soon finds himself caught in the crossfire as Billy and Garrett square off in a deadly game of cat and mouse.

Bride Wars is one of those Chris Pratt movies and tv shows where two girls, who have been the dearest of friends since childhood and together made many plans for their respective weddings, turn into sworn enemies in a race to get married before the other.

Deep in the Valley is one of those Chris Pratt movies and tv shows where a magic video booth sends two pals (Christ Pratt, Brendan Hines) to a land of bawdy babes.

Among all Chris Pratt movies and tv shows, here is the list of his best TV Shows that you should watch.