From The Circle to Oculus, here is the best list of Karen Gillan movies and tv shows. 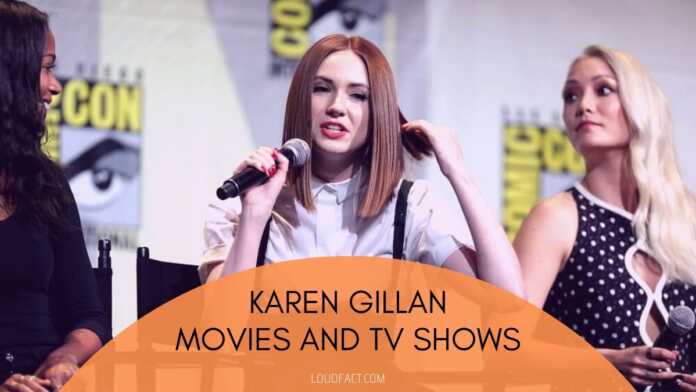 Karen Gillan is a Scottish actress, director, and screenwriter. She played the role of Amy Pond, companion to the Eleventh Doctor, in the BBC science fiction series Doctor Who. She has also played a number of characters in ‘The Kevin Bishop Show,’ a comedy series. and also seen in John Osborne’s play ‘Inadmissible Evidence’ that marked her first theatre appearance.

Here is the list of some of the best Karen Gillan movies and tv shows, along with her not-so-successful films that are worth watching.

Avengers Infinity War is one of those Karen Gillan movies and tv shows where Iron Man, Thor, the Hulk and the rest of the Avengers unite to battle their most powerful enemy yet — the evil Thanos. On a mission to collect all six Infinity Stones, Thanos plans to use the artifacts to inflict his twisted will on reality. The fate of the planet and existence itself has never been more uncertain as everything the Avengers have fought for has led up to this moment.

Peter escapes from the planet Morag with a valuable orb that Ronan the Accuser wants. He eventually forms a group with unwilling heroes to stop Ronan.

In 2008, Wall Street guru Michael Burry realizes that a number of subprime home loans are in danger of defaulting. Burry bets against the housing market by throwing more than $1 billion of his investors’ money into credit default swaps.

His actions attract the attention of banker Jared Vennett (Ryan Gosling), hedge-fund specialist Mark Baum (Steve Carell) and other greedy opportunists. Together, these men make a fortune by taking full advantage of the impending economic collapse in America.

Guardians of the Galaxy Vol 2 is one of those Karen Gillan movies and tv shows where Peter Quill and his fellow Guardians are hired by a powerful alien race, the Sovereign, to protect their precious batteries from invaders.

When it is discovered that Rocket has stolen the items they were sent to guard, the Sovereign dispatch their armada to search for vengeance. As the Guardians try to escape, the mystery of Peter’s parentage is revealed.

Four high school kids discover an old video game console and are drawn into the game’s jungle setting, literally becoming the adult avatars they chose. What they discover is that you don’t just play Jumanji – you must survive it.

To beat the game and return to the real world, they’ll have to go on the most dangerous adventure of their lives, discover what Alan Parrish left 20 years ago, and change the way they think about themselves – or they’ll be stuck in the game forever.

Haunted by the violent demise of their parents 10 years earlier, adult siblings Kaylie (Karen Gillan) and Tim (Brenton Thwaites) are now struggling to rebuild their relationship. Kaylie suspects that their antique mirror, known as the Lasser Glass, is behind the tragedy.

The seemingly harmless reflections contain a malevolent, supernatural force that infects the mind of anyone who gazes at it. As Kaylie gets closer to the truth, the siblings become caught in the mirror’s evil spell.

Not another happy ending is one of those Karen Gillan movies and tv shows where After discovering that his only successful author (Karen Gillan) has writer’s block because she’s too happy, a publisher (Stanley Weber) tries to inspire her creativity by making her (Karin Gillan) miserable.

A mysterious drifter (Ethan Hawke) and his dog journey toward Mexico through the barren desert of the Old West. Hoping to shorten their trip, they cut through a large valley, landing in the forgotten town of Denton — a place is now known as a valley of violence.

The once-popular mining town is nearly abandoned and controlled by a group of misfits and nitwits, including the seemingly untouchable Gilly (James Ransone), the troublemaking son of the town’s difficult marshal.

Alistair’s (Dougray Scott) idea of fun is striking strange bargains with desperate people. While interviewing Jamie (Alastair Mackenzie) for a position in his office, the sleazy banker coerces him into playing a dangerous game.

The two men find Sean (James Anthony Pearson), a rough young teen whose pregnant sister owes money to some local thugs. Alistair proposes to pay the sister’s debt if Sean can resist capture for 12 hours. As the night wears on, Sean realizes someone isn’t playing fair.

Outcast is one of those Karen Gillan movies and tv shows where the tale of Petronella and her boyfriend Fergal as their doomed relationship unwind. Stalked by a terrifying beast who by killing the local is working its way closer and closer to the protagonist couple and they are forced to do everything in their power to escape.

Mae Holland (Emma Watson) seizes the opportunity of a lifetime when she lands a job with the world’s most powerful technology and social media company. Encouraged by the company’s founder (Tom Hanks), Mae joins a groundbreaking experiment that pushes the boundaries of privacy, ethics and personal freedom.

Her participation in the experiment and every decision she (Karen Gillan) makes soon starts to affect the lives and futures of her friends, family and that of humanity.

The Party’s Just Beginning is a 2018 British-American drama film, written and directed by Karen Gillan. It stars Gillan, Lee Pace, Matthew Beard, Paul Higgins, and Siobhan Redmond. The movie had its world premiere at the Glasgow Film Festival on February 24, 2018. It was released on December 7, 2018, by The Orchard.

Warning Labels is one of those Karen Gillan movies and tv shows where two CDC workers meet for drinks, it quickly became clear that everyone is in love with the wrong person.

Darren, who has Aspergers, has gone throughout his life not truly connecting with anyone, until one day he happens upon a girl nursing a broken bird. She needs him.

Conventional is one of those Karen Gillan movies and tv shows where an aging scream queen deals with her insignificance.