Clapping Hands Emoji: What Does It Mean? Clap Emoji Facts

Facts about one of the frequently used emoji in social media. 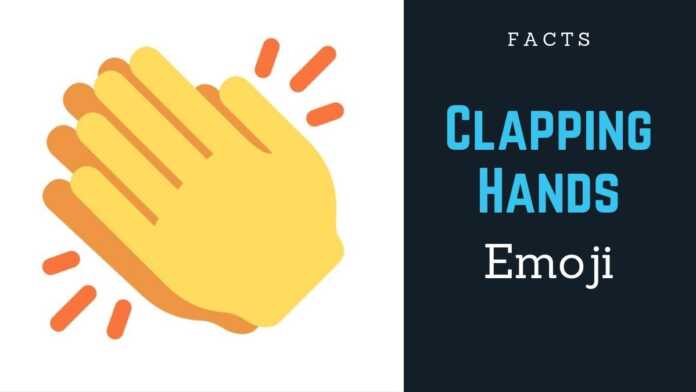 Clap emoji: Clapping hands emoji is one of the commonly used symbols that can be used on smartphones, tablets, and computers. However, your device requires to support this particular emoji in order for you to be able to use it, or else, the emoji will not appear.

Clapping Hands emoji represents the two applauding hands. Many people use it in its direct meaning of applause, i.e. appreciation of someone’s success or talent, skillfulness or achievements, for example, as a part of a congratulations message.

There are a few ways through which you can use this special clap emoji. The simplest way maybe by using the shortcode :clap: which adds the clapping hands emoji to your input box.

One of the facts about the Clap emoji is that it is the official symbol of Zedd’s verified Snapchat account — who is a famous German DJ and musician.

Clap emoji was part of the proprietary/non-standardized emoji set first introduced by Japanese carriers like Softbank. These emojis became part of the Apple iPhone starting in iOS 2.2 as an unlockable feature on handsets sold in English-speaking countries.

In iOS 5 / OSX 10.7, the underlying code that the Apple OS generates for this emoji was changed.

Generally, there are several different ways you can intersperse clapping hands emoji with text:

However, the most commonly used clap emoji way is the following format.

What does Clap emoji mean when used?

Clapping Hands Emoji when used repetitively in a row signifies applause. However, nowadays it’s a common emoji over Twitter. A couple of months back I was also confused about the usages of the clap emoji and out of nowhere people started to use it on Twitter after every other word which created more mess.

So I moved to Reddit and Quora to get some answers and to my surprise, nearly a dozen questions were asked about it. So what does clapping hand emoji really mean?

While most people describe it as extra emphasis when making a point during a statement, I personally believe it’s a Twitter trend to emphasize opinion tweets.

As per the Urban Dictionary, this clap emoji is dubbed as “Ratchet Clap”, however most Twitter users called it an emphasis clap.

While few knew the true meaning of it others, especially youths misinterpreted it and make it a trend to use without any motive. As we are handling it wrongly now its importance is somewhat fading away with each passing year.

The clapping hand’s emoji otherwise pronounced as clap emoji has existed in Unicode since 2010, however, it truly started to use widely in 2014. And now it’s so popular on social media that there is a website devoted entirely to automatically putting the emoji between each word for you for whatever you type into it.

Most Twitter users nowadays turn the clap into a mocking gesture, emphasizing things that really need no such emphasis. While some others feel different and fight against it quoting that clapping hands do not make a statement any more valid or original.

To use ‘clapping hands emoji’ on social media like Twitter, Facebook, or Instagram, you can copy the clap emoji character on the left. This is a special character, not an image, so it can be used in any medium.

How can I use the clapping hands emoji on social media accounts?

Social media websites and apps like Facebook, Twitter, Instagram, and most other social networks have built-in support for standard emojis that can be accessed through a menu. You can also copy and paste the text version of the clap emoji (????) into your social media posts.

Keep in mind that not everyone who sees your post may have support for these emojis, and Twitter and Facebook limit the emojis you can use in your name and description.

Here are some of the examples of clap emoji.