What Does Upside Down Smiley Mean? Facts Explained

One emoji open to any interpretation, it's so confusing! 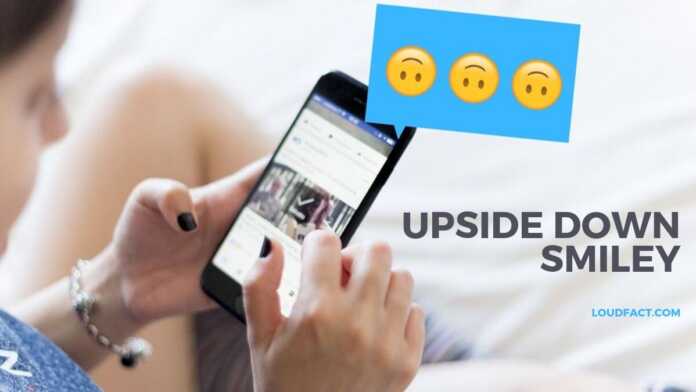 Upside Down Smiley(Face emoji) looks like just another smiling smiley but in upside down. Like the original slight smiley emoji this Upside Down smiley used for the very same thing. Many get confused with its different orientation and ask questions like what is Upside Down smiley meaning?, Where it is used?

According to Emojipedia, the Upside Down Smiley represents a “sense silliness or goofiness. Sometimes used as an ambiguous emotion, such as joking or sarcasm.” It’s also known as the sarcasm or silly face by many users.

The upside-down smiley emoji, also known as the upside-down face emoji has different meanings depending on the context and nature of the user. The most common meanings of this emoji are silliness, sarcasm, passive aggression, irony, or frustrated resignation. Apart from these this emoji can also be used for several other emotions.

The Upside Down smiley included in Unicode 8.0 in 2015. Since then its been widely used to carry out ambiguous emotions. It helps users to convey tones like sarcasm or silliness in written text, as well as to communicate confusion or irony.

It’s the visible opposite of the regular smiley emoji, which might lead to the understanding that the meaning of the text is the opposite of what it seems.

According to Emojipedia, the upside-down face emoji is meant to show “silliness or goofiness.” It also says it’s an “ambiguous emotion,” with people using it in a funny or sarcastic manner. Basically, everyone uses it so differently and it’s not simply a smiley face turned upside down.

How To Use Upside Down Smiley Emoji

When it was first introduced, people were so confused about how to use the upside down face emoji as it doesn’t have an explicit meaning. With time it becomes one of the most used emoji because of its openness to any interpretation. There are absolutely no limitations to this emoji which makes it more fun to use it.

Here are some of the common ways to effectively use the upside down face emoji:

1. When You Are Distressed

For some people, the upside down smiley has become a sign of distress and they use it to indicate the emotion of totally calm on the outside, but breaking slowly on the inside.

2. Express To Look Up

Well, you may say most people look at this emoji in this way. If you want to express to look up for something tall then it can be well used in that scenario.

As per Emojipedia, the upside down smiley emoji should also be used to express silliness. So the next time when you feel harmlessly eccentric or trying to represent someone or something then you can add this emoji to express it through text.

One of the best ways to use upside down smiley emoji is to be used sarcastically to indicate that you’re not really smiling at something thing you purport to be smiling about.