From Finding Dory to The Hangover here are some of the best movies to watch when you're sad. 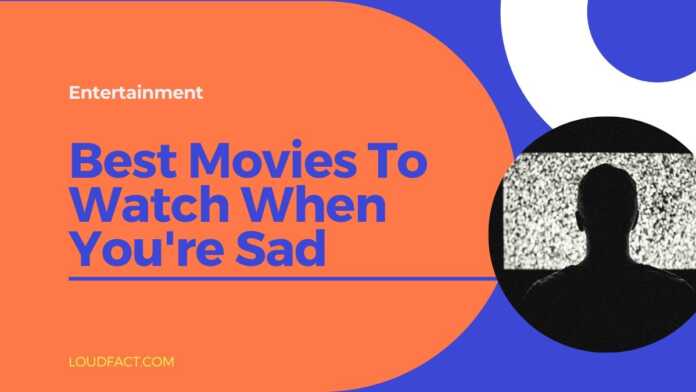 Undoubtedly entertainment is one of the easiest ways to get rid of sadness. Mostly we prefer watching movies while we are sad and getting into good movies help us recover up to some extent. For this, we have listed some of the best movies to watch when you’re sad.

Whatever kind of movie you’re looking for, the list got you covered. Starting from some of the best childhood movies to fantasy and action films this list will help you recover from your sadness.

Movies To Watch When You’re Sad

Happy Potter series probably the best series that most people like. So if you are feeling sad or depressed then dive into the magical world of Harry Potter to recover.

With vague memories of her past, an amnesiac blue tang fish, Dory, sets off in search of her long-lost parents with the help of her friends, clownfish Marlin and his son Nemo. “Finding Dory” is everything a movie should be: emotionally satisfying, touching, preposterously and steadfastly funny.

In Toy Story 3 before Andy leaves for college, his toys are mistakenly delivered to a daycare center. Woody convinces the other toys that they were not dumped and leads them on an expedition back home.

This definitely is a kid’s movie for kids and grown-ups. It is full of color, verve, drama, action, comedy and filled with Woody and Buzz adventure.

Remy, a rat, aspires to become a renowned French chef. He doesn’t realize that people despise rodents and will never enjoy a meal cooked by him.

The Angry Birds Movie also referred to as Angry Birds is a 2016 computer-animated comedy film based on Rovio Entertainment’s video game series of the same name, produced by Columbia Pictures and Rovio Animation, and distributed by Sony Pictures Releasing. It is one of the best movies to watch when you’re sad, this will make you laugh and forget your grief.

6. The Sound of Music

Maria, an aspiring nun, is sent as a governess to take care of seven motherless children. Soon her jovial and loving nature tames their hearts and the children become fond of her.

This classic film is filled with glorious songs (“Do-Re-Mi,” “My Favorite Things,” “Edelweiss, “So Long, Farewell”) and has plenty for hopeless romantics to enjoy.

When Bella Swan relocates to Forks, Washington, to live with her father, she meets a mysterious Edward Cullen to whom she finds herself drawn. Later, she discovers that he is a vampire.

Director Catherine Hardwicke nails the teen emotions and relationships, and she stays surprisingly faithful to the novel. – Sandie Angulo Chen

NASA astronauts observe that a large asteroid will hit earth in the next eighteen days and destroy life. They realize that their only hope of survival is Harry Stamper, an oil driller.

Produced by Jerry Bruckheimer and directed by Michael Bay, “Armageddon” is a super-packaged product that turned a natural disaster into box-office gold.

If you are looking for one of the best movies to watch when you’re sad then Life Is Beautiful probably the movie for you. This magnificent film gives us a glimpse of the Holocaust, but it is really about love, and the indomitability of humanity even in the midst of inhumanity.

A Jewish father and his family are surrounded by Nazi death camps. Living in a hostile environment, he uses humor to shield his young son from the grim realities of war.

This is one of the stress buster movie where Elena Houghlin is a scientist, engineer, and inventor of Calisto. Calisto is a sustainable energy source that will revolutionize the way people use power.

But when the cutting edge technology falls into the wrong hands, Elena turns to the Townsend Agency for help. Now, it’s up to the Angels — Jane, Sabina, and the newly recruited Elena — to retrieve Calisto before it can be transformed into a weapon of mass destruction.

The Hangover is a series of three American comedy films created by Jon Lucas and Scott Moore and directed by Todd Phillips. All three films follow the misadventures of a quartet of friends who go on their road trip to attend a bachelor party.

The Hangover is one of the best movies to watch when you’re sad. Three guys wake up after a bachelor party with absolutely no memory of what happened the night before. There’s a baby in the closet, one guy is missing a tooth, there’s a tiger in the bathroom, & the groom-to-be has disappeared.

This movie is my all-time favorite. Spielberg’s story-telling along with award-winning special effects makes it one of the greatest blockbusters of all time.

John Hammond, an entrepreneur, opens a wildlife park containing cloned dinosaurs. However, a breakdown of the island’s security system causes the creatures to escape and bring about chaos.

So go forth and watch these amazing movies when you’re feeling like you need something to recover from your sadness.