From Shovel Buddies to The Babysitter, here is the best list of Bella Thorne movies and tv shows. 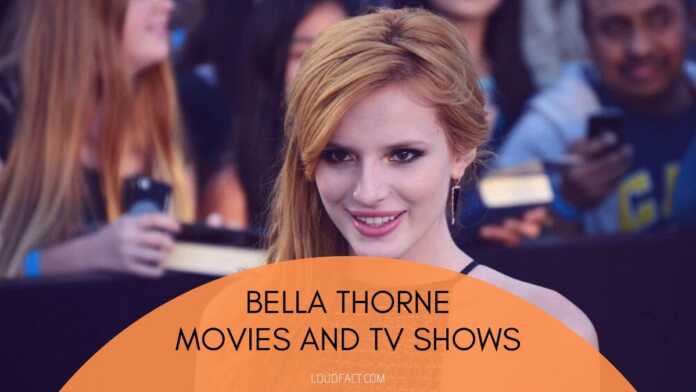 Are you looking for the list of Best Bella Thorne Movies and TV shows? Annabella Avery Thorne is an American actress and singer. Among all Bella Thorne movies and tv shows she gained recognition for her CeCe Jones role in ‘Shake It Up’. Bella Thorne stands as an example of what life can be and how one can change it. She started appearing as a child model in order to support her family.

She was also seen in ‘My Own Worst Enemy’, a television series where she performed the role of Ruthy Spivey and in ‘Big Love’, as Tancy Henrickson. Bella Thorne has done a number of roles in movies and tv shows which made her a teenage sensation. Some of her exceptional performances include ‘You Get Me,’ ‘Blended,’ ‘The Babysitter,’ ‘The Duff,’ ‘Midnight Sun,’ ‘Famous in Love,’ and ‘Perfect High,’ besides various others.

Here is the complete list of the best Bella Thorne movies and tv shows that are worth watching.

After a horrible blind date, a man and a woman find themselves stranded at a family resort. At the resort, however, their fondness for each other mushrooms.

The DUFF is one of those Bella Thorne movies and tv shows where Bianca begs a handsome guy in school to save her senior year from turning into a fiasco.

When Cole stays up past his bedtime, he discovers that his hot babysitter belongs to a satanic cult that will stop at nothing to keep him quiet.

Midnight Sun is a romantic tearjerker about 17-year-old Katie Price (Bella Throne), sheltered at home since childhood with a rare genetic condition, a life-threatening sensitivity to sunlight. Having only her father Jack (Rob Riggle) for the company, Katie’s world opens up after dark when she ventures outside to play her guitar.

One night, her dreams come true when she’s noticed and asked out by her longtime crush Charlie (Patrick Schwarzenegger), whom she’s secretly watched from her bedroom window for years.

Alexander and the Terrible, Horrible, No Good, Very Bad Day is one of those Bella Thorne movies and tv shows where Alexander faces a nightmare when he discovers a gum stuck in his hair. He feels disastrous when his family isolates him, so he wishes for a bad day for them.

In 1973 legendary martial artist Bruce Lee dies while filming “Game of Death.” Rather than scrap the movie, producers decide to hire a stand-in for Lee. Among the actors in line are a Bruce Lee imitator (Roger Fan), a white man (McCaleb Burnett) and a former TV star (Dustin Nguyen) who now earns a living as a door-to-door salesman.

Stuck on You is one of those Bella Thorne movies and tv shows where Bob and Walt, who are conjoined twins, own a restaurant in a small town. One day, Walt decided to pursue acting and to honor their childhood pact, the two travel to Hollywood to fulfill his dreams.

I Still See You is one of those Bella Thorne movies and tv shows where it narrates what if your whole world was haunted? Based on the novel Break My Heart 1,000 Times.

Forget Me Not is one of those Bella Thorne movies and tv shows where Sandy’s (Carly Schroeder) friends start disappearing after they awaken the spirit of a dead girl, and it is up to her to unlock a dark secret before her sanity completely eroded.

Trying to win the approval of her friends, 17-year-old Tiffany sneaks out of the house to go to a Halloween bash at a fraternity. The fun soon ends when police and the cranky, fast-talking Madea (Tyler Perry) arrive to crash the party.

Unhappy with this sudden turn of events, the vengeful collegians decide to scare Madea and her cronies with a series of pranks. She soon finds herself under attack and on the run from an assortment of ghosts, ghouls, and zombies on the scariest night of the year.

You Get Me is one of those Bella Thorne movies and tv shows where a one-night stand with Holly turns into a nightmare for Tyler, a high school student.

Dee’s daughter Hazel suffers from agoraphobia and Dee decides to take her to the treatment center. They must save themselves after they are attacked by two gunmen on their way.

High school senior Lily and her three best friends live in a haze of texts, posts, selfies, and chats, just like the rest of the world. Their small town gets turned upside down when an anonymous hacker starts to reveal personal messages and secrets of thousands of people. As anger erupts into full-blown violence, the four girls soon find themselves in a fight for their lives against an armed mob.

The Seer is one of those Bella Thorne movies and tv shows where a dangerous sect prepares to awaken an ancient evil that threatens to destroy mankind.

Shovel Buddies is one of those Bella Thorne movies and tv shows where Four teenagers go on a quest to honor their friend’s final wish after he succumbs to leukemia.