12 Best Movies About Reading That Book-Lovers Will Appreciate 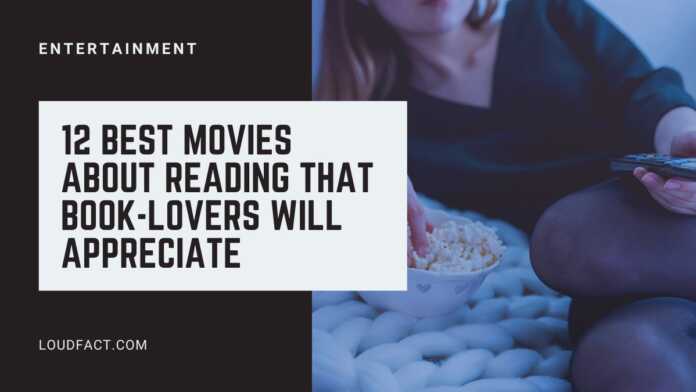 Looking for movies about reading? It’s always a pleasure to watch a movie by yourself or with friends, but selecting the movie is quite a difficult task. If you are a person like me who spends more time selecting a quality movie than watching it then you are in luck.

With so many choices available, how does a book-lover find the perfect movie to watch? If you’re an avid reader then these twelve movies are worth watching in which books aren’t just mentioned or seen, they are major plot elements and even characters.

Here are the twelve best movie about reading in alphabetical order.

1. Back To The Future II

The film follows Marty McFly (Fox) and his friend Dr. Emmett “Doc” Brown (Lloyd) as they travel from 1985 to 2015 to prevent Marty’s son from sabotaging the McFly family’s future; when their arch-nemesis Biff Tannen (Wilson) steals Doc’s DeLorean time machine and uses it to alter history for his benefit, the duo must return to 1955 to restore the timeline.

2. Beauty and the Beast

Beauty and the Beast is a 2017 American musical romantic fantasy film directed by Bill Condon from a screenplay written by Stephen Chbosky and Evan Spiliotopoulos.

The film is a live-action adaptation of Disney’s 1991 animated film of the same name, itself an adaptation of Jeanne-Marie Leprince de Beaumont’s 18th-century fairy tale.

It is one of the movie about reading when Jamal, an African-American teenager, gains admission to a prestigious private school and discovers his talent for writing with the help of William Forrester, a reclusive author.

It is one of the good movies where two people met each other to help each other overcome difficulties. The story’s uniqueness within the plot and characters allow the audience to derive a transformative experience that is scarce in the film making industry.

4. Harry Potter And The Chamber Of Secrets

Undoubtedly Harry Potter is one of the best selling novel and the movie also performed quite well in the box office. Harry Potter and the Chamber of Secrets is a 2002 fantasy film directed by Chris Columbus and distributed by Warner Bros. Pictures.

This movie is based on J. K. Rowling’s 1998 novel of the same name. The film is a sequel to the 2001 film Harry Potter and the Philosopher’s Stone and the second installment in the Harry Potter film series. It was written by Steve Kloves and produced by David Heyman.

A house-elf warns Harry against returning to Hogwarts, but he decides to ignore it. When students and creatures at the school begin to get petrified, Harry finds himself surrounded in mystery.

5. Indiana Jones And The Last Crusade

Indiana Jones and the Last Crusade is a 1989 American action-adventure film directed by Steven Spielberg, from a story co-written by executive producer George Lucas. It is the third installment in the Indiana Jones franchise.

Harrison Ford reprises the title role, while his father is portrayed by Sean Connery. Other cast members featured include Alison Doody, Denholm Elliott, Julian Glover, River Phoenix, and John Rhys-Davies. In the film, set largely in 1938, Indiana searches for his father, a Holy Grail scholar, who has been kidnapped by Nazis.

When archaeologist Indiana Jones learns that his father Dr Henry Jones has disappeared while looking for the Holy Grail, he sets out to look for his father.

Harold’s life is turned upside down by a narration only he can hear. When the voice declares that Harold is facing death, he realizes he must find out who it is and persuade it to change his fate.

The English Patient is a 1996 American romantic war drama film directed by Anthony Minghella from his own script based on the novel of the same name by Michael Ondaatje and produced by Saul Zaentz.

The film tells the story of four people who find themselves in an abandoned villa in northern Italy in the last months of World War II. The eponymous protagonist, a man burned beyond recognition who speaks with an English accent, tells his story to the young nurse caring for him in a series of flashbacks, revealing his true identity and the love affair he was involved in before the war.

The film was released to critical acclaim, and received 12 nominations at the 69th Academy Awards, winning nine, including Best Picture, Best Director for Minghella, and Best Supporting Actress for Juliette Binoche.

The Help is a 2011 period drama film written and directed by Tate Taylor and adapted from Kathryn Stockett’s 2009 novel of the same name. The film features an ensemble cast, including Jessica Chastain, Bryce Dallas Howard, Allison Janney, Octavia Spencer, and Emma Stone.

The film and novel recount the story of a young white woman and aspiring journalist Eugenia “Skeeter” Phelan. The story focuses on her relationship with two black maids, Aibileen Clark and Minny Jackson, during the Civil Rights Movement in 1963 Jackson, Mississippi.

In an attempt to become a legitimate journalist and writer, Skeeter decides to write a book from the point of view of the maids, exposing the racism they are faced with as they work for white families. Black domestic workers in 1960s America were referred to as “the help”, hence the title of the putative journalistic expose, the novel and the film.

The Hours is a 2002 psychological drama film directed by Stephen Daldry and starring Meryl Streep, Nicole Kidman, and Julianne Moore.

The plot focuses on three women of different generations whose lives are interconnected by the novel Mrs. Dalloway by Virginia Woolf.

These are Clarissa Vaughan (Streep), a New Yorker preparing an award party for her AIDS-stricken long-time friend and poet, Richard (Harris) in 2001; Laura Brown (Moore), a pregnant 1950s California housewife with a young boy and an unhappy marriage; and Virginia Woolf (Kidman) herself in 1920s England, who is struggling with depression and mental illness while trying to write her novel.

The NeverEnding Story is a 1984 English-language German fantasy film directed and co-written by Wolfgang Petersen. It is based on the novel The Neverending Story by Michael Ende.

The film was produced by Bernd Eichinger and Dieter Giessler. It stars Noah Hathaway, Barret Oliver, Tami Stronach, Patricia Hayes, Sydney Bromley, Gerald McRaney, Moses Gunn, and Alan Oppenheimer as the voices of both Falkor and Gmork (as well as other characters).

The film follows a boy who happens upon a magical book that tells of a young warrior who is given the task of stopping the Nothing, a dark force, from engulfing the mystical world of Fantasia.

This film tells the story of banker Andy Dufresne (Tim Robbins), who is sentenced to life in Shawshank State Penitentiary for the murders of his wife and her lover, despite his claims of innocence.

The Brothers Grimm is a 2005 adventure fantasy film directed by Terry Gilliam. The film stars Matt Damon, Heath Ledger, and Lena Headey in an exaggerated and fictitious portrait of the Brothers Grimm as traveling con-artists in French-occupied Germany, during the early 19th century.

However, the brothers eventually encounter a genuine fairy-tale curse that requires real courage instead of their usual bogus exorcisms. Supporting characters are played by Peter Stormare, Jonathan Pryce, and Monica Bellucci.

Disclosure: Bear in mind that some of the links in this post are affiliate links and if you go through them to make a purchase then this blog may receive a commission. Although we receive a commission for using and linking affiliate products, they are extremely good and all our opinion and suggestions are unbiased.