What Does ‘TFW’ Mean? TFW Definition And Why People Use It? 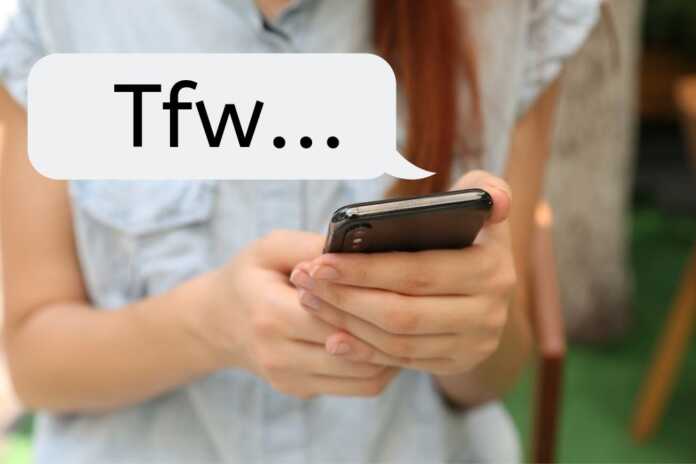 What does tfw mean?

TFW also known as tfw is a common abbreviation on social media and the internet which usually means “that feel when,” “that feeling when,” or “that face when.” It is an expression that people use to express a statement and display their emotions. Usually, it is used to highlight awkward, ridiculous, annoying, disturbing, or odd things that happen to someone.

Where does tfw come from?

It has been hypothesized that the TFW developed from the earlier meme “I Know That Feel Bro”. TFW also stood for “that face when”, it is also eventually linked to an illustration known as That Feel Guy sometime in early 2011.

tfw began to rise in demand in 2012. Finally, tfw became a standalone phrase and no longer relied on images to get across its point, though they are sometimes useful.

It’s not clear that where exactly the acronym is originated from, however, it could very likely be tied to the I Know That Feel Bro meme which popped up on the Internet sometime in 2010.

TFW is commonly meant to be followed by a definitive sentence of some sort of relatable situation. tfw also can be paired with a photo or even a GIF to further visually express the emotion behind the message. However, mostly nothing carries it better than an image.

How TFW Is Used

People generally use TFW to carry some kind of emotion or feeling in any given context that’s relatable enough to other users who know exactly what you mean. You can also use it in your own way. You may use tfw with or without an image or GIF.

tfw acts more like a conversational marker and its that which signals that someone is about to share some type of information, typically something that’s happened to them. The message that follows might be extremely relatable to the person who is reading or it might be far too specific to be relatable.

#TFW when your best friend goes out with your ex, without your permission.

Here the abbreviation is That feeling when. A saying used to describe something your feeling, typically in a blog or when you remember a moment.

Tfw your mom doesn’t bring food even when starving.

Here the abbreviation stands for That Face When.

Means weird or stranger than usual. Basically the same thing as WTF but to a more extreme.