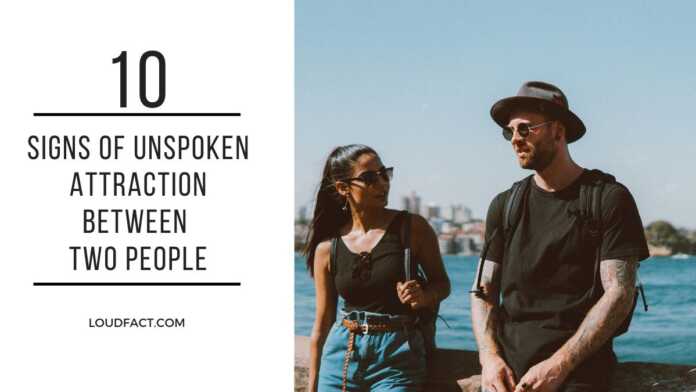 Unspoken Attraction Between Two People: It can be frustrating when two people like each other but are afraid of rejection so much that they can’t admit it. So how to know he is attracted to you? Don’t worry there are always signs of unspoken attraction between two people and this article will help you find out those signs.

Most of the times we don’t want to compromise a friendship or make things awkward in the office if we like a colleague. Because unspoken attraction between friends and colleagues can cause problems if we finally decide to talk about it and openly admit our feelings for one another.

These signs of unspoken attraction can be spotted on any person if you just pay attention and look hard enough. So we don’t really need to directly talk about the feelings we are trying to hide because we will be able to read between the lines and figure out is the attraction mutual or not.

1. You are always smiling around each other

It is one of the clear signs of unspoken attraction between two people. It’s hard not to smile when we are close to someone we’re attracted to. This is because we kind of feel-good when around people we like.

When you notice someone looking at you with a silly smile on their face, it is one of the sings of unspoken attraction. Additionally, these people can’t resist smiling even on the mention of the name of the person they like. Even just thinking about them makes them smile.

2. You Flirt With Each Other

A lot of people flirt with each other but don’t have a real mutual connection with each other. Although, if the flirting is done in a funny way it probably is just that a joke but we can’t refuse that it’s not a sign of mutual attraction.

When someone teases you or vice versa, it shows that you both are closer to each other. You are already probably close with them, and this is just a more intimate act between the two of you.

3. You Both Share Secrets That You Don’t Tell Others

Good friends often share secrets. However, you have put your trust in someone when it comes to sharing personal details about you or your life. This requires a certain level of intimacy and a clear sign of unspoken attraction between two people.

In terms of telling each other secrets, maybe this person is the first person you want to share the good news you get with. Whatever the reason is, its time to start asking why it is them you always talk to and trust in.

4. You Both Comfortable With Each Other’s Touch

When we touch someone during interaction it’s a sign of unspoken mutual attraction. This reflects that the chemistry between them is strong.

No matter whether it’s a warm hug or a simple pat on the shoulder, people who show signs of deep attraction will not be able to keep their arms off of each other.

5. You Both Get Connected With Each Other’s Lives

It’s normal for friends to get connected with each other, however, if it seems like this is different with this person then its a sign of unspoken attraction between two people.

With someone who you are attracted to, you will apparently be wanting to know about their life to see if they have a partner or if they are dating anyone.

Hence, if you find yourselves talking at length about personal details or your past romance history, you can be certain that you share a mutual attraction for each other.

6. You Both Try To Look Best

If we attracted to someone then its a fact that we will constantly try to fix our appearance in the hope of looking best in the eyes of that person. Further, when we care about someone, we also care deeply about how they perceive us, and we want to show ourselves in the best possible light.

So if you both trying to fix your hair, clothes, or make-up, then those are the signs of unspoken attraction. We will even become frustrated if everything about us isn’t looking perfect because we want it to be perfect for the other person.

7. You Both Even Enjoy The Silence

When you are around someone you are attracted to, there will never be an awkward silence between you. Further, you both will enjoy the silence.

We have all been on those dates where we find ourselves in the uncomfortable silence that’s making us nervous, and inevitably ruins the mood.

But the unspoken attraction between two people will create a silence that is comfortable for both of them. They enjoy being quite and getting lost in each other eyes.

So if you are feeling calm when there is a silence between you and you feel like you understand each other perfectly without using any words, it is clear that there is an undeniable attraction between you two.

8. You Try To Make Each Other Laugh

Men will always try to be funny just to get a woman they’re attracted to laugh. It’s a fact that humor has always been considered hot. So, when we are attracted to someone, we will do our best to make them enjoy our company by making them laugh.

Additionally, men try to impress women with how funny they are since they knew women find a good sense of humor to be an irresistible quality in a man.

So if he is going out of his way to make you laugh and comes up with a new exciting joke every day, he is actually showing signs of unspoken attraction.

9. You Both Ignore Others When Together

When two people are attracted to each other, they will stop noticing anyone else around them. This is because they want to pay full attention to the person who they are attracted to.

They will not hesitate to neglect everyone in order and focus entirely on one another. This is actually a great habit of successful couples because the person they care about grabs all of their attention.

10. Other’s Tell That Your Chemistry Is Off The Scale

If other people are coming to you and saying you both that you should just get together because they can feel your chemistry then this is a clear sign of unspoken attraction between two people.

You may notice it but other people will be able to see the relationship and bond you share together, from the outside. So it’s better to accept it as they can see the truth in your relationship from where they are.

Remember its hard to find someone with this type of bond, so if you think its the real connection between you two then it’s better to make it official. Further, whatever you decide to do with the information that you received through this article, I really hope that it has helped. Just follow your gut instinct and take the right decision.