Will He Come Back? 10 Assuring Signs He’ll Back 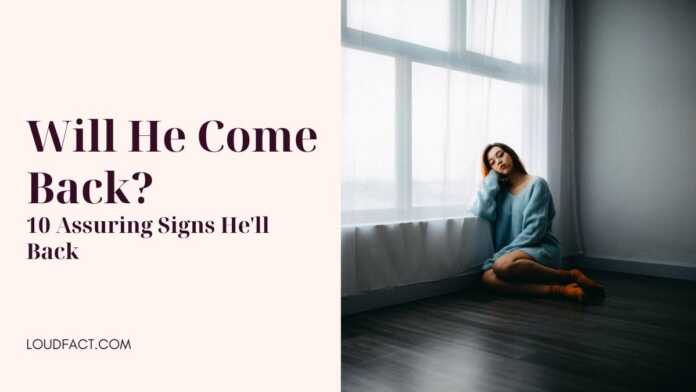 Are you currently experiencing a tough breakup? Wondering will he come back to be with you again? Don’t worry you are in the right place and I going to give you all your answers related to these questions.

When you end a serious relationship, not only you lose your boyfriend but also your best friend. Further, this is more if you were engaged or in a long-term relationship with him and now everything that you see reminds you of him.

You have to understand that suffocating an ex is not going to make him want to come back. If you’re terrified that you’re going to lose your ex forever then its time to check for some signs to find out what’s true.

Will He Come Back? Signs To Look

You’re obsessed with a man who was your whole world and with him decided to move on it hard for you to accept the things. No matter how much you try, you can’t eat and you spend a lot of time with cramps in your stomach that don’t let you relax.

You’re sad because you gave yourself all into the man who decided to end your relationship and leave you like he was leaving nothing. There may be a lot of reason behind his plan to leave, but remember love doesn’t go away just overnight. So if you are asking yourself “will he come back” then look for the below signs to identify.

Some people feel they owe it to you and this feels like guilt. If he has feelings like this then the move-on drama will be temporary and he will try to come back one way or another.

Even if you don’t try to manipulate them to come back to you they will eventually return because of their guilt.

Some people hate to fail. Further, they pride themselves on finishing what they started. If your ex is one of those kinds then he will return back to you.

Although this is commendable, it will not last forever. No one can stay in an unfulfilling situation forever, so try to solve any misunderstanding next time when he comes back to you.

3. Realization Of Lucky To Have You

When he notice how lucky he was to have you in his life, he will come back to you. Your ex-boyfriend could be having these realizations because he tried to get a new girlfriend, but she just wasn’t like you. He might have noticed how perfect the two of you were for each other.

Most of the times people don’t see how good their relationships are until they separated. Once he realizes how important those little, everyday moments with you were he will regret leaving and return back to you.

It is one of the greatest signs he’ll back. After he moved on you may think he isn’t there but he’s there and fully present. If he’s always around, on your social media, talking to your friends and family—he’s there and waiting for the moment to talk to you.

5. You Had This Before

For some couples fighting over small things, break up and get back together again are common. If you both have similar incidents before then it’s a chance that this time the case is that too.

This will probably happen another hundred times. But, if this is happening then you should ask yourself why and if this pain is really worth it.

6. He Contacts With Silly Reasons

If you are thinking will he come back then this is the sign you should watch. If he still wants to be with you then he will search for silly reasons to start a conversation with you.

If your ex calling you or texting you for reasons that you think are too silly then try to end to conversation fast to check his reaction. If he keeps on talking then its a sign he’ll back.

7. He Brings Up The Past

People don’t bring up the past until they want to fix it. Have you ever had a fight with your friend and not spoken for a couple of weeks? What happens?

Finally, someone breaks the silence and brings the fight up because they want to move past it. If they don’t care, they don’t bring it up. Like that, if your ex wants you back then will try to bring possible reasons relates to the past.

8. He Still Connected With Your Family

Why would anyone keep in contact with their ex’s family? I mean, your relationship would need to be extremely close in order for that to happen.

Also, after a while, if they move on, the contact slowly decreases. But if he’s still talking to your brothers, he isn’t letting go.

9. He Does Drunk Call/Text

This is the more obvious reason to assume that he’ll come back. Further, this is a sign that the guy really likes you.

If he pulls a drunk call, he’s done. The cat’s out of the bag, he lost the game. Now, what really matters is if he’s going to message you when he’s sober.