RN is one of those popular acronyms which can show up almost everywhere. 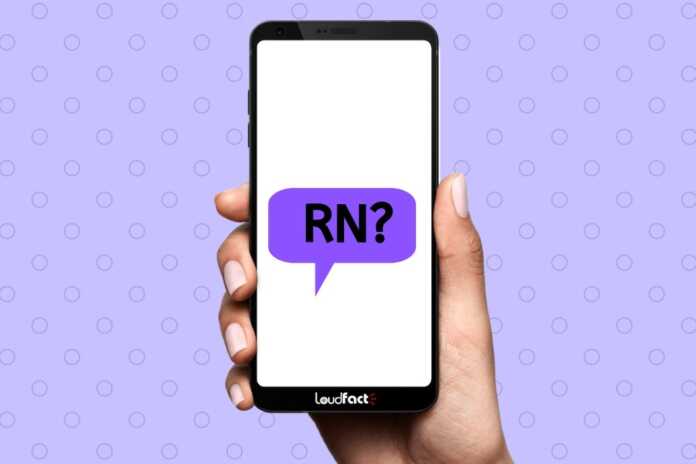 RN is one of those heavily used acronyms which mostly used on all over social media. Are you feeling clueless about this texting abbreviations? Did you receive a text message or email with the acronym RN, or maybe you find RN on one of the social media sites like Facebook, Twitter, or Google Plus?

This acronym is commonly used while texting and sooner or later you will see someone use the acronym RN. Here’s everything you need to know about this relatively popular acronym.

What Does RN Mean?

RN stands for “Right Now“. This acronym refers to the present moment, not five minutes from now or an hour ago or yesterday or tomorrow. It means precisely now!

RN is most commonly used to describe anything that is currently happening in the present. Which includes,

The current event is usually described first, and then the RN follows directly after. Unlike other popular acronyms such as AF, TLDR, SMH, and others, RN is rarely ever used as a standalone phrase and almost always acts as an additional piece of information following a statement.

How to Use Use RN

You may see RN in most of the social media, however, it’s not necessary to use it in most of the cases. For example, consider the fact there isn’t much difference between saying something like, “It’s 6:30” and “It’s 6:30 rn.” So, here you’d most likely to presume that it’s 6:30 even if the acronym not used in the phrase.

So the question is why to use the acronym in a phrase? RN is more about adding emphasis rather than giving extra information. Most people can already figure out that you’re talking about something that’s happening in the current moment unless you specifically describe it as having happened in the past or as expected to happen in the future, so RN does nothing but emphasize the here and now.

Take another look at the examples below, but this time, pretend that RN isn’t there. You’d still assume that these events were taking place in the present. The extra addition of the acronym simply highlights this fact.

Dev: Can you come to my place RN?

Emily: Hey why are not picking up my phone?