From Cookie's Fortune to Armageddon, here are some of the best Liv Tyler movies to watch this weekend. 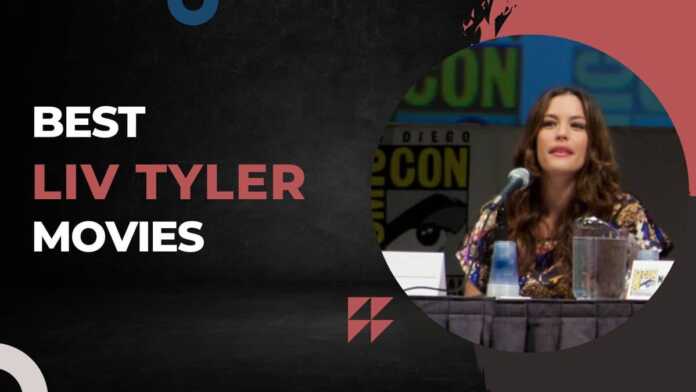 Best Liv Tyler Movies: Liv Rundgren Tyler is an American actress, producer, singer and former model. She began a modeling career at age 14 and later decided to focus on acting and made her film debut in Silent Fall (1994). She played Arwen Undómiel in the Lord of the Rings film trilogy (2001–2003), which became one of the highest-grossing film series in history.

Continuing the plot of the previous film, Frodo, Sam and Gollum are making their final way toward Mount Doom in Mordor in order to destroy the One Ring, unaware of Gollum’s true intentions, while Merry, Pippin, Gandalf, Aragorn, Legolas, Gimli and the rest are joining forces together against Sauron and his legions in Minas Tirith.

Set in Middle-earth, the story tells of the Dark Lord Sauron, who seeks the One Ring, which contains part of his might, to return to power. The Ring has found its way to the young hobbit Frodo Baggins.

The fate of Middle-earth hangs in the balance as Frodo and eight companions (who form the Fellowship of the Ring) begin their journey to Mount Doom in the land of Mordor, the only place where the Ring can be destroyed.

Cookie’s Fortune is a 1999 American black comedy film directed by Robert Altman and starring Glenn Close, Julianne Moore, Liv Tyler, Patricia Neal, Charles S. Dutton, and Chris O’Donnell. It follows a dysfunctional family in small-town Mississippi and their various responses to the suicide of their wealthy aunt, some of them turning criminals.

Reign Over Me is a 2007 American buddy drama film written and directed by Mike Binder, and produced by his brother Jack Binder. Charlie’s world gets shattered after losing his wife and daughters in the 9/11 terrorist attacks. However, a reunion with his former college roommate could help him assuage his grief.

Armageddon is a 1998 American science fiction disaster film produced and directed by Michael Bay, produced by Jerry Bruckheimer, and released by Touchstone Pictures. The film follows a group of blue-collar deep-core drillers sent by NASA to stop a gigantic asteroid on a collision course with Earth.

NASA astronauts observe that a large asteroid will hit earth in the next eighteen days and destroy life. They realize that their only hope of survival is Harry Stamper, an oil driller.

Ad Astra is a 2019 American science fiction adventure drama film co-produced, co-written, and directed by James Gray. It follows an astronaut who ventures into space in search of his lost father, whose obsessive quest to discover intelligent alien life at all cost threatens the Solar System and all life on Earth.

The Incredible Hulk is a 2008 American superhero film based on the Marvel Comics character the Hulk. Produced by Marvel Studios and distributed by Universal Pictures, it is the second film in the Marvel Cinematic Universe (MCU).

In the film, Bruce Banner becomes the Hulk as an unwitting pawn in a military scheme to reinvigorate the “Super-Soldier” program through gamma radiation. Banner goes on the run from the military while attempting to cure himself of the Hulk.

Robot & Frank is a 2012 American science fiction comedy-drama film directed by Jake Schreier from a screenplay by Christopher Ford. An aging jewel thief is gifted a robot by his son. He is initially reluctant to accept it, but he soon realizes that the robot can help him commit burglaries.

That Thing You Do! is a 1996 American comedy film co-starring, written, and directed by Tom Hanks, in his feature writing and directorial debut. It tells the story of the rise and fall of a fictional 1960s one-hit wonder pop band.

In the 1960s, a pop rock band recruits jazz lover Guy whose refreshing beats catapult them towards success. But they are also among the many bands that try to emulate The Beatles.

Onegin is a 1999 British-American romantic drama film based on Alexander Pushkin’s 1833 novel in verse Eugene Onegin, co-produced by British and American companies and shot mostly in the United Kingdom.

In 1820s St. Petersburg, Russia, the cynical nobleman Onegin (Ralph Fiennes) finds himself the new owner of a country estate following the death of his uncle. Deciding to abandon the fast-paced city for the leisurely countryside, Onegin takes over the estate.

There, he soon befriends his neighbor Lensky (Toby Stephens), who introduces the aristocrat to his fiancee’s sister, Tatyana (Liv Tyler). Onegin and Tatyana share an attraction, but Onegin’s coldness threatens the relationship.

Inventing the Abbotts is a 1997 American period coming-of-age film directed by Pat O’Connor. Drama set in the 1950s has the working-class Holt brothers avenge the rich Abbott sisters for imagined wrongs inflicted by the girls’ father.