Best Adventure Movies of All Time

From Prey to Interstellar, here is the list of best adventure movies of all time. 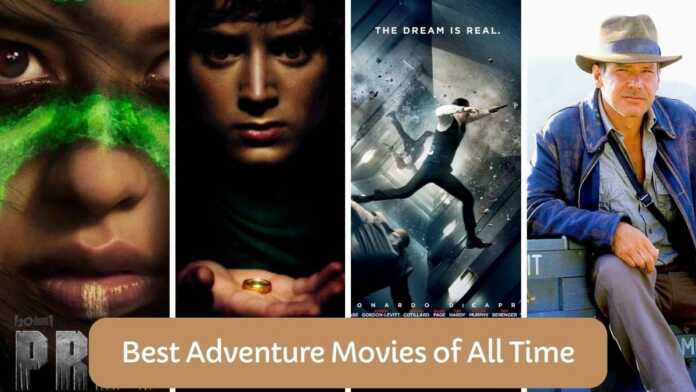 Looking for the best adventure movies of all time? A good adventure story has the ability to draw us into a world we might otherwise never explore. With adventure movies, we come to care about the characters and the things that are important to them. We visit places we would normally never choose to go and sometimes glimpse a little spark of adventure inside us we didn’t know was there.

The film is the first installment in The Lord of the Rings trilogy. Set in Middle-earth, the story tells of the Dark Lord Sauron, who seeks the One Ring, which contains part of his might, to return to power.

The Ring has found its way to the young hobbit Frodo Baggins. The fate of Middle-earth hangs in the balance as Frodo and eight companions (who form the Fellowship of the Ring) begin their journey to Mount Doom in the land of Mordor, the only place where the Ring can be destroyed.

Set three years after the events of Star Wars, the film recounts the battle between the malevolent Galactic Empire, led by the Emperor, and the Rebel Alliance, led by Princess Leia. Luke Skywalker trains to master the Force so he can confront the powerful Sith lord, Darth Vader.

Interstellar is a 2014 science fiction film co-written, directed and produced by Christopher Nolan. Set in a dystopian future where humanity is struggling to survive, the film follows a group of astronauts who travel through a wormhole near Saturn in search of a new home for mankind.

Set “a long time ago” in a fictional universe where the galaxy is ruled by the tyrannical Galactic Empire, the story focuses on a group of freedom fighters known as the Rebel Alliance, who aim to destroy the Empire’s newest weapon, the Death Star.

Luke Skywalker becomes caught in the conflict while learning the ways of a metaphysical power known as “the Force” from Jedi Master Obi-Wan Kenobi.

Avengers: Endgame is a 2019 American superhero film based on the Marvel Comics superhero team the Avengers. Produced by Marvel Studios and distributed by Walt Disney Studios Motion Pictures, it is the direct sequel to Avengers: Infinity War (2018). In the film, the surviving members of the Avengers and their allies attempt to reverse the destruction caused by Thanos in Infinity War.

Indiana Jones and the Last Crusade is a 1989 American action-adventure film directed by Steven Spielberg, from a story co-written by executive producer George Lucas. It is the third installment in the Indiana Jones franchise.

In the film, set largely in 1938, Indiana searches for his father, a Holy Grail scholar, who has been kidnapped and held hostage by the Nazis while on a journey to find the Holy Grail.

Jaws is a 1975 American thriller film directed by Steven Spielberg, based on the 1974 novel by Peter Benchley. It stars Roy Scheider as police chief Martin Brody, who, with the help of a marine biologist (Richard Dreyfuss) and a professional shark hunter (Robert Shaw), hunts a man-eating great white shark that attacks beachgoers at a summer resort town.

Avatar is a 2009 American epic science fiction film directed, written, produced, and co-edited by James Cameron. It is set in the mid-22nd century when humans are colonizing Pandora, a lush habitable moon of a gas giant in the Alpha Centauri star system, in order to mine the valuable mineral unobtanium.

The expansion of the mining colony threatens the continued existence of a local tribe of Na’vi – a humanoid species indigenous to Pandora. The film’s title refers to a genetically engineered Na’vi body operated from the brain of a remotely located human that is used to interacting with the natives of Pandora.

Indiana Jones and the Temple of Doom is a 1984 American action-adventure film directed by Steven Spielberg. It is the second installment in the Indiana Jones franchise, and a prequel to the 1981 film Raiders of the Lost Ark, featuring Harrison Ford who reprises his role as the title character.

In the film, after arriving in India, Indiana Jones is asked by desperate villagers to find a mystical stone and rescue their children from a Thuggee cult practicing child slavery, black magic, and ritual human sacrifice in honor of the goddess Kali.

Everything Everywhere All at Once is a 2022 American absurdist science fiction comedy-drama film written and directed by Daniel Kwan and Daniel Scheinert, who produced it with the Russo brothers.

It stars Michelle Yeoh as a Chinese American woman being audited by the IRS who discovers that she must connect with parallel universe versions of herself to prevent a powerful being from causing the destruction of the multiverse.

Prey is a 2022 American science fiction action horror film based on the Predator franchise. It is the fifth installment and is a prequel to the first four films, being set in the Northern Great Plains in North America in 1719. The film is directed by Dan Trachtenberg and written by Patrick Aison.

The story revolves around Naru, a skilled Comanche warrior, who is striving to prove herself as a hunter. She finds herself having to protect her people from a vicious, humanoid alien that hunts humans for sport, as well as from French fur traders who are destroying the buffalo they rely on for survival.

In the film, Parker asks Dr. Stephen Strange to use magic to make his identity as Spider-Man a secret again following its public revelation at the end of Far From Home. When the spell goes wrong because of Parker’s actions, the multiverse is broken open, which allows visitors from alternate realities to enter Parker’s universe.