Here are 30 amazing Costa Rica facts that every traveler should know. 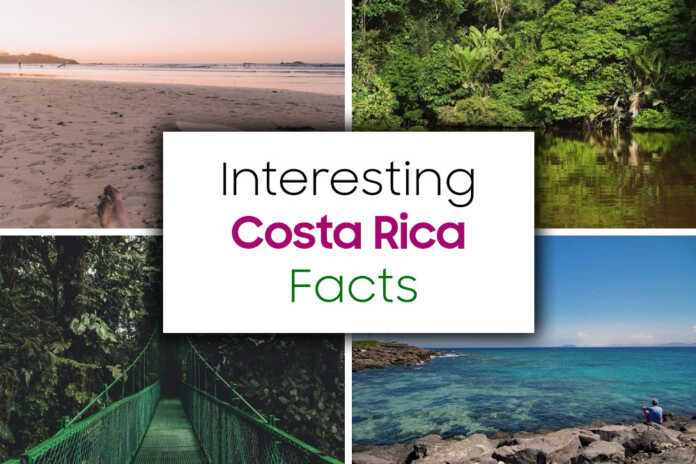 Planning a trip to Costa Rica? Then these interesting Costa Rica facts are for you.

Costa Rica is a small country that is located in Central America and known for its beautiful sandy beaches, magnificent palm trees, plenty of wildlife reserves, and world-class beach resorts. If you are a nature lover then this beautiful Caribbean tourism hotspot is a must-visit for you. If you are never visited Costa Rica before and planning to do so, then make sure that you read these interesting Costa Rica facts completely.

1. Costa Rica utilizes the Costa Rican colon as its currency.

2. The official language of the country is Spanish, but Mekatelyu and Bribri are both recognized indigenous languages.

4. It is a crime to drive your car into San Jose on the day of the week that corresponds to the last number on the car’s license plate.

5. This Country has more than 121 volcanic formations, with seven of them being active.

6. You can call it superstition or whatever you want to, but in Costa Rica, all Catholic Churches face west.

7. The country is host to more than 5% of the world’s biodiversity.

8. Until a few years ago, wearing shorts was a sign of disrespect. And government buildings wouldn’t allow visitors to enter unless they were wearing long pants.

9. Costa Rica has an exceptionally high life expectancy of 79, one of the highest in the world.

10. There are usually no street names or addresses.

12. Over 25% of Costa Rica’s land is set aside for national parks and refuges.

13. Hospitality is abundant in the country. Tourists who stay in the country for weeks can get to know the locals, and will probably be invited to family dinners and celebrations.

14. Art is a thriving part of Costa Rica’s society. They have many museums that tourists frequent and have many street sculptures that dot the streets of prominent cities.

15. Pura Vida is the national saying of Costa Rica, and it translates into pure life. Costa Ricans use the saying to wish someone goodwill, say goodbye and ask someone how they are doing.

16. Women do not take their husband’s last name when they get married. Instead, the woman uses her maiden name throughout her entire life. Children will take the last name of their fathers.

17. The average salary of a Costa Rican is $6,000 US dollars per year. Tourism is the country’s main source of foreign exchange. This position was previously held by the production and sale of bananas.

18. Costa Rica has become known for its beautiful beaches. The country has over 800 miles of coastline along the Pacific and Caribbean coasts.

21. Costa Rica is often referred to as a hummingbird capital. The country has about 52 native species of hummingbirds.

23. The Happy Planet Index has determined that Costa Ricans are some of the happiest people in the world.

24. Costa Rica is the 13th largest exporter of coffee in the world. Coffee is known as “Grano de Oro” — or “grain of gold” — in this country.

25. Costa Rica banned recreational hunting in 2012. It was the first country in the world to ban this practice.

26. When you visit this country and ask a taxi guy to take you to a nightclub, you will be taken to a strip club! Costa Ricans call strip clubs, and nightclubs.

27. The rare golden toad only resides in the Monteverde rainforest reserve. For this reason, it was picked as of the symbols of this Costa Rican town.

28. Do you want to see turtle eggs? Then visit Ostional National Wildlife Refuge from April to December. Over 100,000 Olive Ridley turtles leave behind nearly 10 million eggs during this season at the beaches of the Refuge.

29. If you love liquor, then while in this country, consider the Guaro. This is a relatively sweet and efficient moonshine rum manufactured from distilled sugar cane.

30. Compared to its size, Costa Rica has the second-highest number of rivers and water bodies in the world. This number of rivers can be attributed to the massive rains due to the presence of a rainforest.

What to read next?

If you are planning to visit Costa Rica, then these amazing Costa Rica facts will help you up to many extents. We suggest you should take a week-long vacation to explore Costa Rica top 10 places to know its culture and attractions.