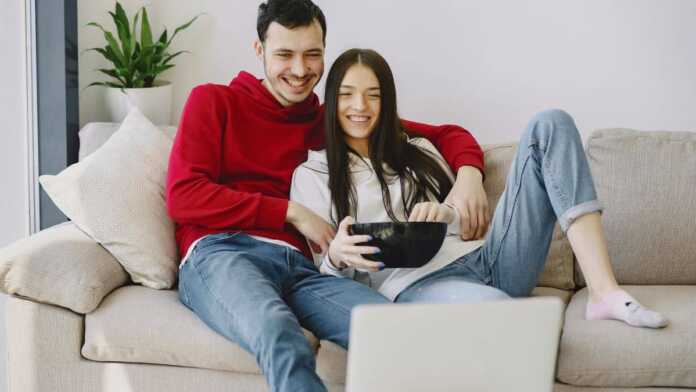 Best Valentine’s Day Movies: Looking for some of the best valentine’s day movies to watch with your loved one? Valentine’s Day is a great day to cuddle up and watch a movie about love. Love is in the air. What better way to enjoy it than curled up on your couch watching a movie? So we’ve done the work for you and created a list of the best romantic movies ever made to watch on Valentine’s Day.

The Notebook is a 2004 American romantic drama film directed by Nick Cassavetes, with a screenplay by Jeremy Leven and Jan Sardi, based on the 1996 novel of the same name by Nicholas Sparks.

The film stars Ryan Gosling and Rachel McAdams as a young couple who fall in love in the 1940s. Their story is read from a notebook in the present day by an elderly man, telling the tale to a fellow nursing home resident.

Titanic is a 1997 American epic romance and disaster film directed, written, produced, and co-edited by James Cameron. Incorporating both historical and fictionalized aspects, it is based on accounts of the sinking of the RMS Titanic and stars Leonardo DiCaprio and Kate Winslet as members of different social classes who fall in love aboard the ship during its ill-fated maiden voyage.

Seventeen-year-old Rose hails from an aristocratic family and is set to be married. When she boards the Titanic, she meets Jack Dawson, an artist, and falls in love with him.

The film stars Leonardo DiCaprio and Claire Danes in the title roles of two teenagers who fall in love, despite their being members of feuding families. The rivalry between Verona’s two well-established families, the Capulets and the Montagues, affects the relationship of their children Romeo and Juliet.

Beauty and the Beast focus on the relationship between the Beast, a prince who is magically transformed into a monster and his servants into household objects as punishment for his arrogance, and Belle, a young woman whom he imprisons in his castle in exchange for her father.

To break the curse, the Beast must learn to love Belle and earn her love in return before the last petal falls from an enchanted rose or else he will remain a monster forever.

Edward Scissorhands is a 1990 American fantasy romance film directed by Tim Burton. It was produced by Burton and Denise Di Novi and written by Caroline Thompson from a story by her and Burton. It tells the story of an unfinished artificial humanoid who has scissor blades instead of hands that are taken in by a suburban family and fall in love with their teenage daughter.

Atonement is a 2007 romantic war drama film directed by Joe Wright. It is based on the 2001 novel of the same name by Ian McEwan. The film chronicles a crime and its consequences over the course of six decades, beginning in the 1930s.

Emerging novelist Briony Tallis falsely accuses her sister’s lover, Robbie, of a criminal offense, after she catches the two in a compromising position.

Love Actually is a 2003 Christmas-themed romantic comedy film written and directed by Richard Curtis. It features an ensemble cast, composed predominantly of British actors, many of whom had worked with Curtis in previous film and television projects.

The screenplay delves into different aspects of love as shown through ten separate stories involving a wide variety of individuals, many of whom are shown to be interlinked as the tales progress. The story begins five weeks before Christmas and is played out in a weekly countdown until the holiday, followed by an epilogue that takes place one month later.

Corpse Bride is a 2005 stop-motion animated musical dark fantasy film directed by Mike Johnson and Tim Burton. The plot is set in a fictional Victorian-era village in England.

Johnny Depp leads the cast as the voice of Victor, while Helena Bonham Carter voices Emily, the titular bride. When Victor is practicing his wedding vows in the woods, he accidentally gets married to a skeleton-like creature called Emily who whisks him off to the land of the dead.

The Holiday is a 2006 romantic comedy film written, produced and directed by Nancy Meyers. It stars Kate Winslet and Cameron Diaz as Iris and Amanda, two lovelorn women from opposite sides of the Atlantic Ocean, who arrange a home exchange to escape heartbreak during the Christmas and holiday season.

Two girls from different countries swap homes for the holidays to get away from their relationship issues. However, their lives change unexpectedly when they meet and fall in love with two local guys.

Pride & Prejudice is a 2005 romantic drama film directed by Joe Wright, in his feature directorial debut, and based on Jane Austen’s 1813 novel of the same name.

The film features five sisters from an English family of landed gentry as they deal with issues of marriage, morality, and misconceptions. Keira Knightley stars in the lead role of Elizabeth Bennet, while Matthew Macfadyen plays her romantic interest Mr. Darcy.

50 First Dates is a 2004 American romantic comedy-drama film directed by Peter Segal. It follows the story of Henry, a womanizing marine veterinarian who falls for an art teacher named Lucy. When he discovers she has amnesia and forgets him when she falls asleep, he resolves to win her over again each new day.