Best Admob Alternatives with higher CPC to try in 2021 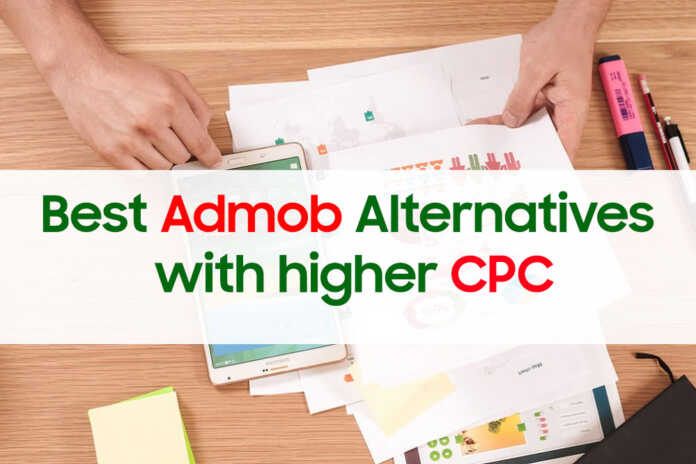 When it comes to Mobile Ad networks, Admob is definitely the winner. But often we search for other alternatives to Admob, which are good for some extra earning. As Facebook Ads network and Amazon ads are known to all, we excluded them from the list.

So here are some best AdMob alternatives, that we think you must try once.

Mobfox has a powerful feature called “MobFox RTB Exchange“, when your app requests an ad, the RTB (Real-Time Bidding) find the campaign that earns you the most from across multiple ad networks, automatically. It gives you full control of the process so you can block unacceptable ads or set floor prices.

Airpush is one of the major ad networks and also the best alternative to AdMob. It has 360 banner system, which can display Video Banners and IAB Standard Banners. It also supports transparent/translucent banners, which display over the content.

Airpush also has 360 Interstitial ads which display Rich Media, Video, Dialog Ads, Airpush’s AppWall, and other ad formats, the ads are placed on top of the content where the user is more focused. It supports both Android and IOS.

InMobi allows you to monetize your apps with a huge range of ad formats. it supports ad formats like,

MoPub, founded in 2010, tweeter company which provides ad monetization for app developers and publishers all over the globe. It supports different types of ads like Image, text, tile, and HTML Banner, Full Screen Interstitial, Native, and Custom formats MRAID 1.0 and 2.0 for certified vendors. It also maximizes your ad revenue and controls your user experience.

LeadBolt is a best alternative ad monetization platform of AdMob, in which you will connect to top in-app advertisers and access to, especially limited release ad campaigns. Their Direct Deals Marketplace lets you search for and apply to the offers you like or their self-optimizing partner matching system can select offers for you. It has supported ad formats like

Facebook Audience Network is another admob alternative from the popular social media platform Facebook. This in-app advertising network for mobile apps is quite popular among publishers because of its high CPC.

Advertisers can serve up their ads to customers who are using mobile sites and apps other than Facebook, extending their reach beyond the platform while still getting to use Facebook’s exceptionally powerful ad system.

Appodeal supply-side platform is designed and built by veteran publishers, for publishers. Appodeal is not an ad network, it is a new approach to monetizing for publishers.

Compared to Google AdMob, Appodeal is: