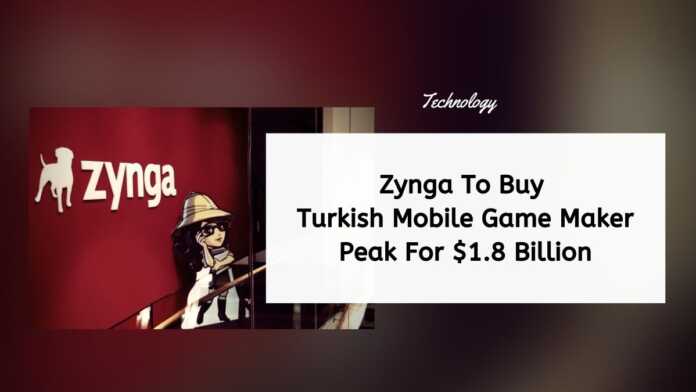 Zynga Inc said it has agreed to buy Turkish mobile-game maker Peak for $1.8 billion in a cash and stock transaction, in a deal that will help the FarmVille maker boost its daily active user base by 60%.

The company has been strengthening its hold on the mobile gaming market through acquisitions and licensing agreements with media outlets to publish themed games of popular franchises.

Zynga also raised its full-year bookings forecast to $1.84 billion from $1.80 billion, which excludes any contribution from the Peak deal.

“We are honored to welcome Sidar and team to Zynga. Peak is one of the world’s best puzzle game makers and we could not be more excited to add such creative and passionate talent to our company,” said Frank Gibeau, Chief Executive Officer of Zynga.

“With the addition of Toon Blast and Toy Blast, we are expanding our live services portfolio to eight forever franchises, meaningfully increasing our global audience base and adding to our exciting new game pipeline. As a combined team, we are well-positioned to grow faster together.”

“This is a monumental partnership not only for Zynga and Peak but for the whole mobile gaming industry,” said Sidar Sahin, founder and Chief Executive Officer of Peak. “Both companies share a common vision — to bring people together through games.

Peak’s culture is rooted in relentless learning and progress, so as we embark on this new chapter in our journey together with Zynga, we remain as committed as ever to our unique culture. We’re very excited for our combined future and what we will accomplish together.”