YouTube Rolled Out Picture-In-Picture Mode For iPhone And iPad

The PiP update is finally here for iPhone And iPad. 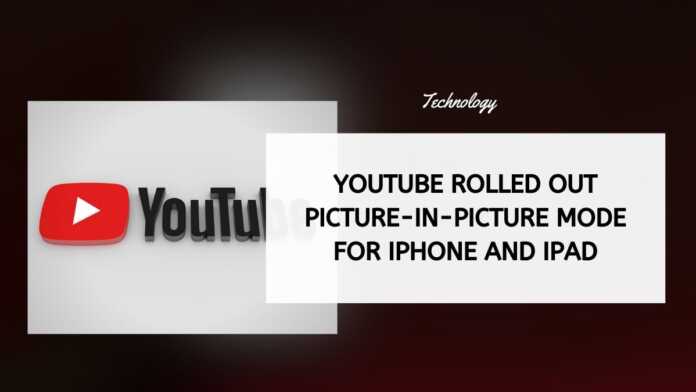 YouTube picture-in-picture (PiP) mode is finally here. Although, it can be said that over the years, Google has added tons of features on YouTube that have not only given users the flexibility to stream videos as per their limitations (both network and hardware) but they have also made it easier for users to access their favorite channels and shows on its platform.

YouTube has started rolling out support for PiP mode on iOS and iPadOS, which means that now iPhone and iPad users will be able to watch videos on YouTube while using other apps.

However, there’s a catch! Will you be able to access YouTube PiP mode? well, this feature is being rolled out only to YouTube Premium users in the US! This means that YouTube users outside the United States cannot access the PiP mode on their iPhones and iPads yet.

Further, users who are accessing the free version of the YouTube app on their Apple devices will not be able to use this feature either

“Picture-in-Picture (PiP) allows users to watch YouTube videos in a small mini player while simultaneously browsing outside of the YouTube app on their mobile device. We’re starting to roll out PiP for YouTube Premium members on iOS and plan to launch PiP for all US iOS users as well,” YouTube confirmed in a statement to MacRumors.

So, even as YouTube has said that PiP mode will be rolled out to all YouTube app users in the US soon, what of the rest of the world? YouTube hasn’t said anything about the global rollout yet. Nevertheless, it is expected to be followed by a global rollout, perhaps in the coming months.

If you’ve got PiP mode on YouTube, you can activate it by playing a video on the app and then swiping up to go home. The video should continue playing in a small window that you’ll see at the bottom of the screen.

You can drag and move the mini player. YouTube also lets you resize the mini-player by pinching it with two fingers.