Microsoft used a similar feature on the Xbox One to resume games, but the Xbox Series X will resume multiple games from a suspended state whether the user rebooting the console, switching games, or resuming from standby. 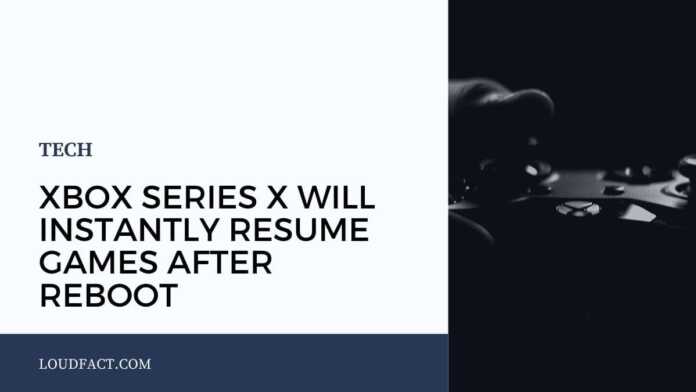 Larry Hryb, the head of Microsoft Xbox Live, has announced a new quick resume feature for the Xbox Series X, which would instantly resume multiple games after the console has rebooted, or even after switching titles.

“I had to reboot because I had a system update, and then I went back to the game and went right back to it, so it survives a reboot,” The Verge quoted Hryb as saying recently.

According to the report, Microsoft used a similar feature on the Xbox One to resume games, but the Xbox Series X will resume multiple games from a suspended state whether the user rebooting the console, switching games, or resuming from standby.

Microsoft had earlier confirmed that the Xbox Series X will include 12 teraflops of GPU performance, which is twice of what is available in the Xbox One X and eight times the original Xbox One.

Overall, the Xbox Series X will come with a significant upgrade over the Xbox One X in terms of processing power and will house new features for the immersive gaming experience.

The console is designed to be used in both vertical and horizontal orientations and it will deliver four times the processing power of Xbox One X in the quietest and efficient way.

Microsoft Xbox Series X will be powered by custom-designed AMD CPU based on Zen 2 and Radeon architecture.

It will also support 8K gaming, frame rates of up to 120 fps in games, ray tracing, and variable refresh rate support.

As per the report, Series X is designed for a future in the cloud and it will combine hardware and software to make it as easy as possible to bring great games to both console and elsewhere.