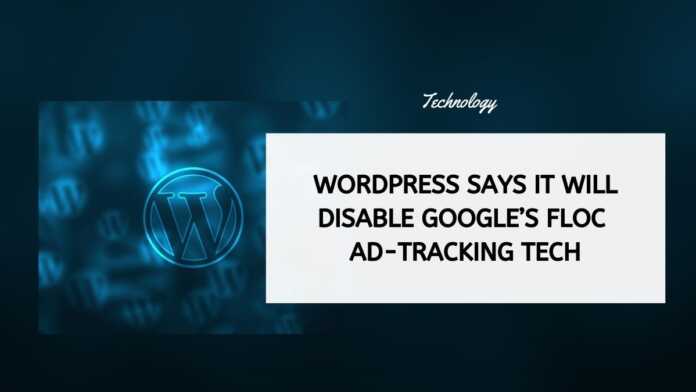 WordPress, a popular content management system, has said it will begin to block Google’s FloC as it considered the ad-tracking technology a security concern. The company has released set codes that allow developers to block the FloC for their websites.

“WordPress powers approximately 41% of the web and this community can help combat racism, sexism, anti-LGBTQ+ discrimination, and discrimination against those with mental illness with four lines of code,” it said in a post.

WordPress also cited a blog post from the Electronic Frontier Foundation that had deemed Google’s FloC a terrible idea. The post had criticized Google’s decision to put people in groups based on their browsing habits. It added that it could lead to different types of discrimination and even predatory targeting of unsophisticated consumers.

In case you did not know, FloC stands for Federated Learning of Cohorts. It is Google’s new technology that replaces the current practice of using third-party cookies for tracking. Google believes that the new system is more secure than the previous one as it shows ads based on your cohort instead of individual data. The company adds that the method will also help improve user privacy as “federated learning” involves sharing fewer data.

Not everyone has bought Google’s privacy argument with FloC. Already, privacy-focused browsers DuckDuckGo, Brave, and Vivaldi have raised concerns over the technology and even vowed to block on their platforms.

“After a short trial period, Google decided not to make this new tracking method a user choice and instead started automatically including millions in the scheme. If you’re reading this in Chrome while logged in to a Google account, yes, that likely means you too, and if not now, then eventually,” DuckDuckGo said in a post recently.

Vivaldi in its post raised similar concerns and announced blocking the technology from its browser. The company said that FloC was a privacy-intensive tracking technology. It also said that the FloC tech could continue to run in parts of the world that were not covered by the EU’s stringent GDPR.