With Windows 11 gradually moving towards its release date, new updates are coming by Microsoft. 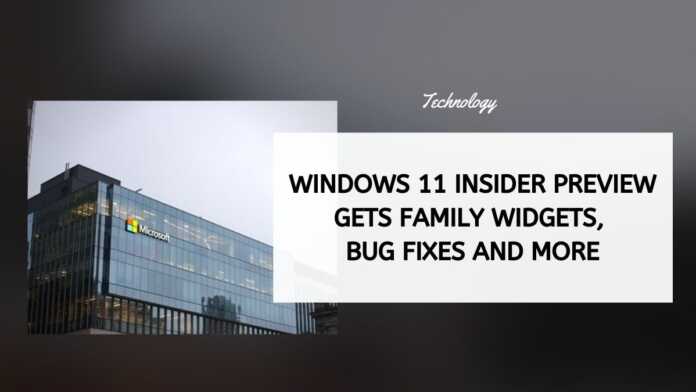 Microsoft recently revealed that it is bringing Spotify integration to Windows 11. The company has also confirmed that Windows 11 is getting a new taskbar, the ability to respond to chats in an inline manner, and an updated Notification Centre.

Now, the company has released Windows 11 Insider Preview Build 22000.120 to all the users in Dev and Beta channels. This update brings new features and bug fixes to Windows 11. In fact, the only thing that Microsoft is not doing is indicating when the Windows 11 release date will be announced.

Microsoft has revealed that Windows 11 Insider Preview Build 22000.120 brings a new Family Widget to all Microsoft users in all Windows languages and regions. This new feature will allow Windows 11 users to see the recent activity of their family members in their Microsoft family group. This includes details such as their location and their total screen time among others.

The company also announced that it has started to roll out notification badging for the Chat icon on the Taskbar. The company said that while changing backgrounds for desktops using Choose Background via Task View, users will find that it will now force Settings to move to whichever Desktop they are actually on.

Additionally, the company said that it has moved the Identify button in Display Settings right under control for arranging the monitors, which makes it easier to find. Microsoft also said that it has updated the “New” button in the File Explorer’s command bar to use a dropdown menu style with all options in one list instead of a nested list.

Microsoft said that it has fixed an issue in which, if users updated their preferred first day of the week, it wouldn’t be reflected in the calendar flyout until they signed out and back in. It has also fixed an issue that could trigger an explorer.exe crash loop for Insiders running Windows with multiple monitors. The company said that it has fixed another issue wherein the Chat window was getting stuck on the screen.

The company also said that Settings will no longer crash when clicking “Facial recognition (Windows Hello)” under Sign-in Settings when Windows Hello is already set up. Furthermore, the company said that it has made a change related to the command bar in File Explorer that was resulting in an increased thread count every time a new File Explorer window was opened that would continually grow, consuming resources.