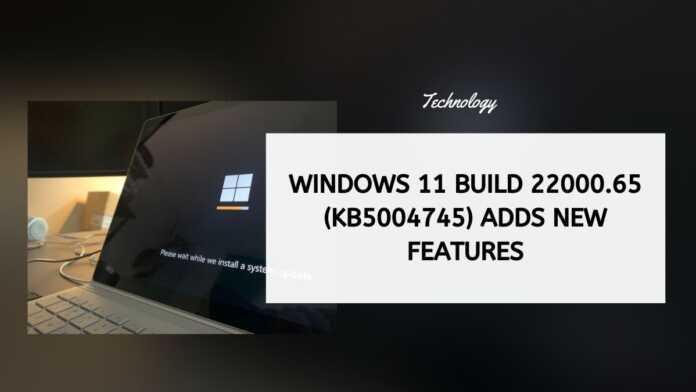 This new cumulative update is the second update to Windows 11 and it adds a new search bar to the Start Menu, Power modes for Windows Settings, and improves the overall taskbar experience.

With Windows 11 KB5004745, Microsoft is adding a new search box to the Start Menu to make it easier to find what you’re looking for. After the update, the Start menu and Windows Search will appear more transparent when you use a bright wallpaper.

Build 22000.65 also comes with one new feature for the taskbar: multiple monitors support. This will allow users to view and manage the taskbar across multiple connected monitors. It can be enabled by visiting Settings > Personalization > Taskbar.

Windows 11 Build 22000.65 has fixed another bug where the “Show Desktop” button wouldn’t work. Another issue has been fixed where the taskbar failed to render the date and time in your preferred format.

In addition to taskbar improvements, Microsoft is also introducing a new modern “alert dialog” that will remind users when the battery is running low or when you change your display settings.

Windows Settings app is even getting support for “Power mode” on the Power & battery page.