A support page highlights that AMD and Microsoft are partnering to resolve these issues. 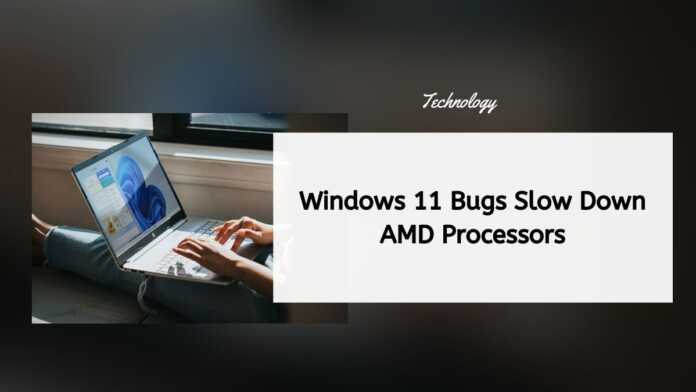 AMD has said that compatible AMD processors might exhibit “reduced performance” in certain applications when running Windows 11 that starting rolling out earlier this month. The chipmaker adds that users may face errors while running some games as well.

A particular error can even impact performance by up to five percent. AMD says software updates expected to roll out this month would fix known issues.

According to a support page outlining issues, AMD says one of the known errors occurs in the L3 cache latency that helps access data from memory.

The page notes, “Applications sensitive to memory subsystem access time may be impacted.” It is expected to get a fix via a Windows update that may roll out this month. The second bug, as Ars Technica explains, is related to the “preferred core” feature that allows a system to use the fastest individual CPU cores in a processor.

AMD has not clarified the significance of the bug on Windows 11, but the company said its impact is more noticeable in chips with more than eight cores and 65W Thermal Design Power (TDP) or higher. It may impact premium PCs running on Ryzen 5 chips. The bug will get addressed with a Windows 11 update later this month.

The support page also highlights that AMD and Microsoft are partnering to resolve these issues with upcoming software updates. The page will later include the names of the impacted processor alongside the update roll information.

The latest version of Windows brings a redesigned UI, a new app store, and features like new Teams integration, a new Windows App Store, and the ability to run Android apps natively. The new Windows will now be rolled out to millions of PCs worldwide over the coming days. Readers can also read our initial impressions of Windows 11 here.