The new Windows 10 update has actually broken the Alt-Tab function on some devices. 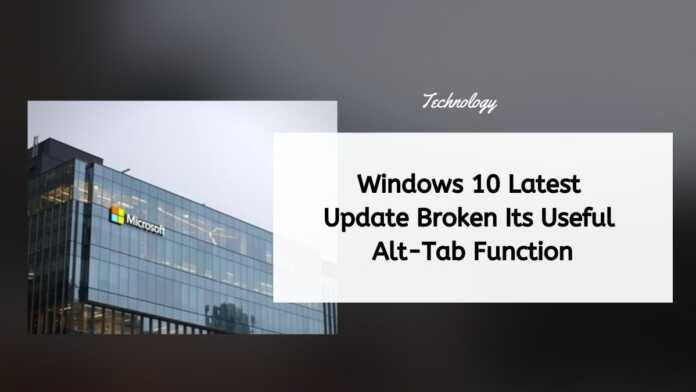 A new Windows 10 update has reportedly broken a major feature for some of the users. The much-loved Alt-Tab function, that’s super handy is not working for a few people post the new update.

While using Windows 10, if you hold down Alt and then press the Tab key on the keyboard, you can scroll through the apps and windows you have open. Once you stop pressing on the Tab key, the highlighted window or app you stop on will be selected and you can jump right to it.

This is a quick and handy way to jump between apps and is extremely useful if you using a full-screen application, like playing a game, and you need to move to another app. This feature also helps if one of the apps or tabs you are on becomes unresponsive. The Alt-Tab feature can get you out of that app/tab that’s not working and you can also save the rest of your work and troubleshoot issues.

As per reports, post the latest updates, the Alt-Tab function is not working for some people, and users are getting to see a blank screen or are just being directed to the Windows 10 desktop. Given how useful this feature is, it’s annoying that it is broken.

There are ways to fix the problem. Some users have reported that uninstalling the faulty update fixes the issues. While that makes sense, it is a rather severe way of fixing the problem. Removing the updates means that you will be missing out on any other fixes and additional features that the update has brought in.