Windows 10 bug is preventing PCs from going in sleep mode 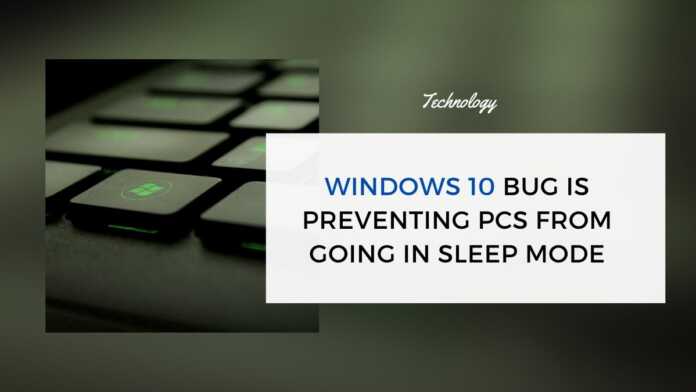 The update brought a host of changes to the Windows PCs including improving battery performance during the Modern Standby mode and fixing issues that prevent the Windows Search box from rendering properly among other things.

Now a report says that the very same update brought a bug to the Windows 10 platform that is preventing PCs running on the latest version of the OS from falling asleep…errr…activating the sleep mode.

According to a report by Windows Latest, the update leads to a host of issues including ‘BSOD errors, blue and black screen before login, reduced performance, FPS drops, audio stutters and system crashes’. It also prevents users from putting their PCs in sleep mode.

This issue was also reported by Windows 10 users on Microsoft’s support page and on Twitter. “No I have to either pause updates for 7 days and then uninstall KB4535996 again. This update causes both my laptop and desktop to not go into sleep mode,” the Windows 10 user wrote on Microsoft’s answer page.

“This update causes 2 computers not to go into sleep mode. Both are running Win 10 Home v. 1909. They both worked fine after I uninstalled the update,” wrote another user.

“Since the latest Windows 10 updates, KB4537572 and KB4535996, my computer is waking itself from sleep every couple of hours,” Tim Thrash wrote on Twitter.

@MicrosoftHelps Since the latest Windows 10 updates, KB4537572 and KB4535996, my computer is waking itself from sleep every couple of hours. Didn’t do this prior to updates. Ideas?

Microsoft hasn’t commented on the matter yet. However, it has reached out to Thrash to help him with the issue.