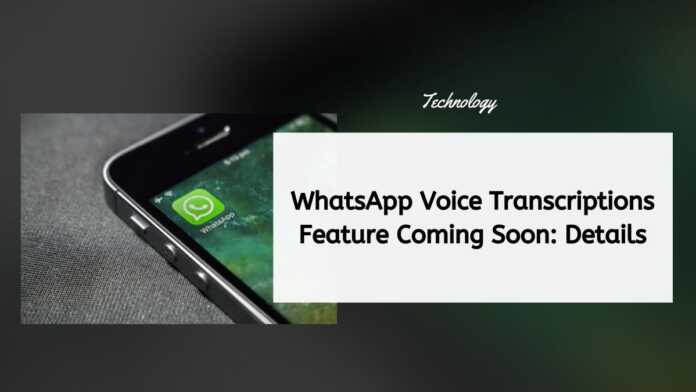 WhatsApp is working on a host of new features, such as Voice Waveforms that are expected to arrive in the coming months. Now, a new report talks about another such feature called that is expected to arrive on the messaging app in the near future. It is called the WhatsApp Voice Transcriptions feature.

According to a report by WABetaInfo, the Facebook-owned messaging app is working on a feature called Voice Transcriptions for its platform. There is a significant benefit to be derived from this WhatsApp feature for users.

The blog site says that the WhatsApp Voice Transcriptions feature will be provided on an opt-in basis, which means that only when a user gives WhatsApp the permission to transcribe a message will it be able to provide the service. This permission will be quite similar to the camera and microphone permissions that users give WhatsApp.

Furthermore, the blog site says that users’ messages will not be sent to WhatsApp or Facebook’s server for getting the transcription. Instead, Apple will provide the service.

One good thing about this arrangement is that these voice transcriptions will not be directly linked to personal identity. Instead, they will be linked to a randomly anonymized ID.

When a user has given WhatsApp the permission to transcribe its voice messages, WhatsApp will open a new ‘Transcript’ section within the app wherein users will be able to jump to a specific timestamp. “When a message is transcribed for the first time, its transcription is saved locally in the WhatsApp database, so it won’t be needed to transcript it again if you want to see its transcription later,” the blog site wrote.

This feature is being developed for WhatsApp’s iOS-based app and it will be available to beta testers with the next update. There is no word on if and when WhatsApp’s Voice Transcription feature will be made available for the Android app.