WhatsApp said that it will be releasing its end-to-end encrypted chat backups as an optional feature. 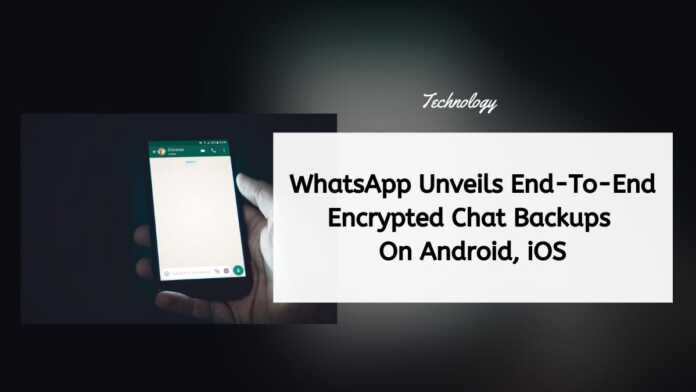 WhatsApp has been said to be working on a feature that would secure its chat backups on Google Drive and Apple’s iCloud using end-to-end encryption (E2E) technique. End-to-end encryption is the same technique that WhatsApp uses to safeguard all the communication taking place on its platform.

Reports in the past have detailed how this feature could be implemented. Now, months later, WhatsApp has finally announced that it is rolling out end-to-end encrypted chat backups on its platform.

“People can already backup their WhatsApp message history via cloud-based services like Google Drive and iCloud. WhatsApp does not have access to these backups, and they are secured by the individual cloud-based storage services…But now, if people choose to enable end-to-end encrypted (E2EE) backups once available, neither WhatsApp nor the backup service provider will be able to access their backup encryption key,” WhatsApp wrote in a blog post announcing the news.

What’s interesting about WhatsApp’s new feature is that unlike (E2E) technique, which it uses by default to secure all conversations on its platform, end-to-end encrypted chat backup is not a default feature.

WhatsApp users need to opt-in or enable this feature in order to ensure that their chat backups on Google Drive or iCloud are protected by the same encryption technology that the company uses to safeguard chats on its platform.

As far as the availability is concerned, WhatsApp said that it will be releasing its end-to-end encrypted chat backups as an optional feature and in the coming weeks it will be rolling this out on its iOS and Android-based apps.