WhatsApp users can use the new Joinable calls feature to attend a group call even if they missed the initial ring while leaving and joining the call. 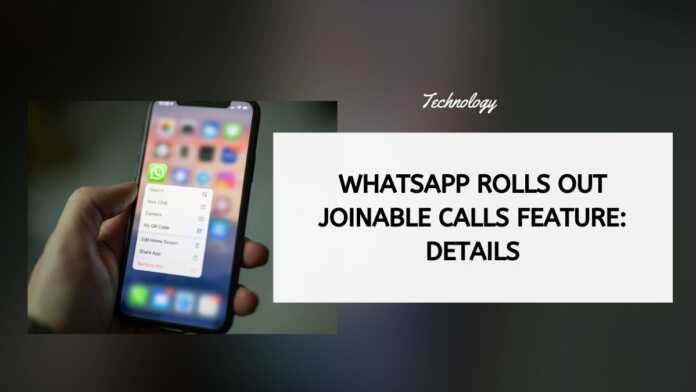 WhatsApp has been working on several features to improve functionality. One of these features is called Joinable calls, and the company has announced that it is rolling out to users.

The new feature will let users join an ongoing group call on WhatsApp after they missed the initial ring when the call began. WhatsApp finally confirmed that the feature was arriving for all users on its blog.

Dubbed ‘Joinable calls’, the new feature allows users to quickly join an ongoing group call whenever they like, as long as the other members are still on the call. Users will be able to see who is present with the new call info screen, along with others who were invited but haven’t joined yet.

The new Joinable calls feature makes group calls on WhatsApp like Google Meet, Zoom, and Microsoft Teams, thanks to the ability for users to drop off calls and rejoin them at any time, as long as the call is still ongoing.

They can do so by visiting the call section on WhatsApp, which will list active group calls they are invited to, which they can join. This will come as a relief for many users who do not have to join a call as soon as the phone starts ringing, especially when it comes to spontaneous or unexpected group calls.

WhatsApp started rolling out the new Joinable calls feature to iOS and Android users but hasn’t specified a version number, which means that the feature should be enabled soon for your device if you are running the latest version on your smartphone.