WhatsApp is rolling out settings to manage reaction notifications in Chats and groups. 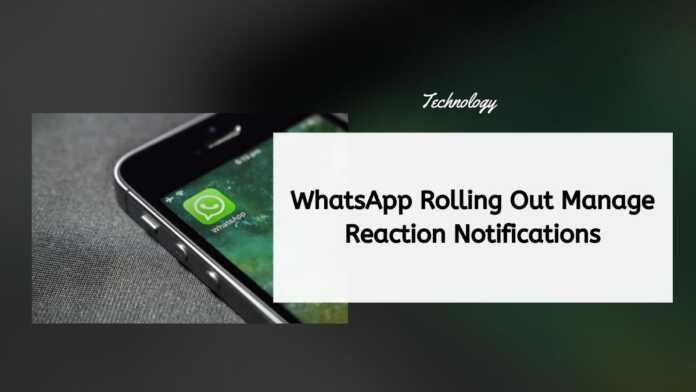 If you have an Android device and use WhatsApp beta then here is an update for you. WhatsApp is rolling out settings to manage reaction notifications in Chats and groups.

“WhatsApp has just submitted a new update through the Google Play Beta Program, bringing the version up to 2.22.6.10. What’s new in this update? WhatsApp is rolling out settings to manage reaction notifications!, “WABetaInfo said in a statement.

As per the information provided in the report, WhatsApp was working on new settings to manage reaction notifications for chats and groups. The feature was even enabled by mistake on WhatsApp beta for iOS devices.

However, it was immediately disabled. And WhatsApp is now releasing settings to manage notifications when you receive a reaction. Android users need to note that they cannot react to the messages now. The activation of the feature is planned soon.

“After installing the new WhatsApp beta for Android 2.22.6.10 update, WhatsApp is now releasing settings to manage notifications when you receive a reaction. Does this mean that you can already react to messages? No, but it makes no sense to release these settings if WhatsApp wants to roll out reactions after a long time, so maybe the activation is planned soon, ” WABetaInfo said.

Apart from this the messaging application is also working on a feature that allows creating polls in groups, for a future update of the app. However, there are no details regarding the same as of now as it is under development. For the uninitiated, using polls you can ask a question and people can vote on that.

According to WABetaInfo, “Polls will only be available in WhatsApp groups and they are end-to-end encrypted… even your answers! So only people in the group can see the poll and the results.”

People who do not use WhatsApp beta and want to get it now can follow the below-mentioned steps for the same.