A new report says that users with certain WhatsApp versions have started receiving the multi-device feature. 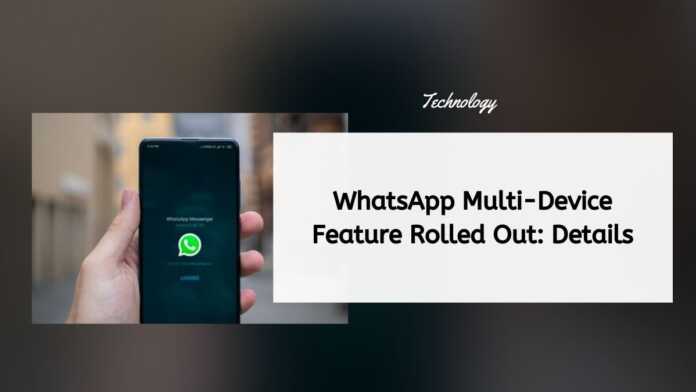 Earlier this year, Facebook founder Mark Zuckerberg confirmed that WhatsApp users will get a great feature in the form of multi-device support later this year. WhatsApp has been testing the feature for months that will allow users of the Facebook (now Meta)-owned to link their account to secondary devices and continue using the messaging platform without the primary smartphone online.

This new feature allows WhatsApp users to send and receive messages on a second device without their primary smartphone online. Now, a new report says that WhatsApp has started rolling out the multi-device functionality to select users.

WABetaInfo reports that the Meta-owned messaging app has started rolling out the multi-device functionality to WhatsApp users. However, the catch is that this is for those who are using WhatsApp beta for Android versions 2.21.23.10 and 2.21.23.

The blog site says that WhatsApp started rolling out a new feature that allows using WhatsApp on linked devices without an active Internet connection on your main phone almost three months back. In the first month, beta testers could join the Multi-device beta to use WhatsApp on up to four linked devices and one smartphone at the same time.

After some time, beta testers that used stable versions of WhatsApp could try multi-device as well. However, not all beta testers could use the feature at the time. Now, WhatsApp has started rolling out the multi-device functionality to all Android beta users running version 2.21.23.10 of the app.

This was revealed in a WhatsApp blog, which added that the feature was also being rolled out to some people on WhatsApp beta for Apple iOS. However, only a limited number of iOS beta testers have access to this feature at the moment. A wider rollout is expected to follow soon.