WhatsApp Migrate Media To Be Hidden With Latest Update

According to WABetaInfo, WhatsApp is now releasing an update on the beta channel in order to hide the “Migrate Media” option. 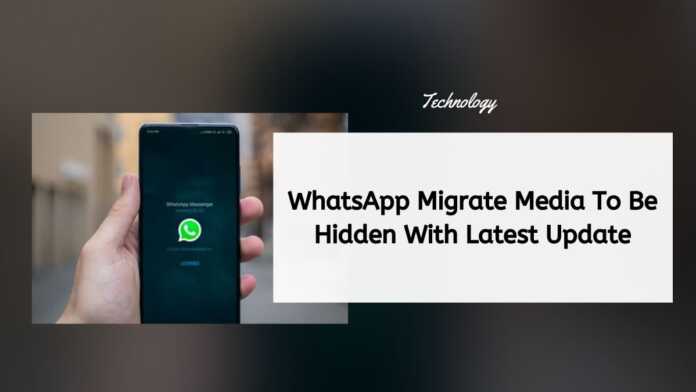 As per the recent report, WhatsApp is rolling out a new update through the Google Play Beta Program, bringing the version up to 2.21.24.11. The messaging app is now releasing an update in order to hide the “Migrate Media” option.

According to the information provided by WABetaInfo, “After releasing a bug fix update to remove a quick edit media shortcut, WhatsApp is now releasing another update in order to hide the “Migrate Media” option.”

WABetaInfo informed about the same via a tweet over its official Twitter account where it wrote, “WhatsApp beta for Android 2.21.24.11: what’s new? WhatsApp is releasing another bug fix update, but this time to remove the unknown Migrate Media option.”

WhatsApp has been continuously working on some or other updates and most of them have been initially rolled out for Android users. Here is all you need to know about the update:

As per the information provided by WABetaInfo, Migrate Media option was available to certain beta testers on Android 11 within WhatsApp Settings. However, lots of people complained that the option did not work and its purpose was unknown.

WhatsApp is releasing another bug fix update, but this time to remove the unknown Migrate Media option.https://t.co/6d14EpcI3t

“A lot of people complained because the option didn’t work and they didn’t know its purpose. Two days ago, I explained on Twitter that the option was not ready and that we had to wait for a new update to discover how it works, instead of some people that were able to make this option work and it moved media from a path to another one.” WABetaInfo said.

It further added that the update is available now but it completely removes the option for everyone if your media files are already migrated on Android 11, so maybe it has been added by mistake. “Please also note to back up your chat history before installing this update, so if there is any issue your chat history is safe,” it said.

Recently, it has also been revealed that the instant messaging app is reportedly working to extend the time limit for deleting the sent messages. Currently, if you have to delete the already sent messages to everyone, then you need to do it within 1 hour, 8 minutes, and 16 seconds time limit. As per the reports, the new WhatsApp message-deleting time limit will be extended to 7 days and 8 minutes.

According to a report by WABetaInfo, “It will be possible to delete messages for everyone older than 1 hour, 8 minutes, 16 seconds at a later date. In particular, we can confirm that WhatsApp is now planning to change the time limit to 7 days and 8 minutes in a future update”.

“The feature is still under development, so their plans about this option may change again and again before the official release or a new announcement from their social accounts,” it added.