Through this new feature, users can look forward to a much better experience. 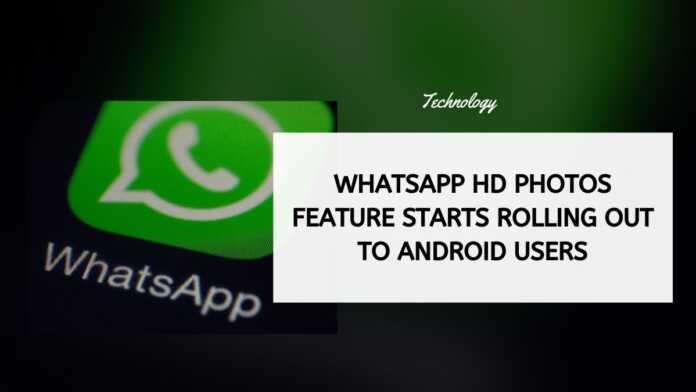 WhatsApp looks to have automated the delivery of new features to its users. A latest report now details a feature that the company has started rolling out to its beta users, called WhatsApp HD Photos.

According to a report by WABetaInfo, WhatsApp has started rolling out a new feature called HD Photos to the users of its Android beta app. This new feature is available as a part of WhatsApp Beta for Android version 2.21.15.5.

The blog site says that this new feature enables WhatsApp users to choose the quality of the photo that they want to share with their friends and family. Users will get three settings to pick from.

This includes Auto, wherein WhatsApp will automatically decide the right algorithm to compress the image. The second option is the data saver option, where the company will compress the image in a way that takes the least amount of data. In this case, the quality of the image will be reduced drastically.

The third option is the Best Quality option. This setting enables users to send high-quality or HD images. It uses the maximum amount of data and maintains the quality of the shared image.

The blog site says that WhatsApp does compress the image when users pick the best quality option. However, that compression is very mild. The company keeps about 80% of the original quality.

If the image is bigger than 2048×2048, it might be resized. “The old configuration allowed to keep about 70% of the quality, but large photos were always resized,” it wrote in a blog post.

That said, this WhatsApp feature is still in the testing phase and so it is possible that beta testers may encounter some bugs while using this feature in the app. It also means that users of WhatsApp’s main app will have to wait a little longer to get their hands on this feature.