WhatsApp for iOS version 22.5.75 has introduced the updated voice recording feature alongside support for Focus Mode. 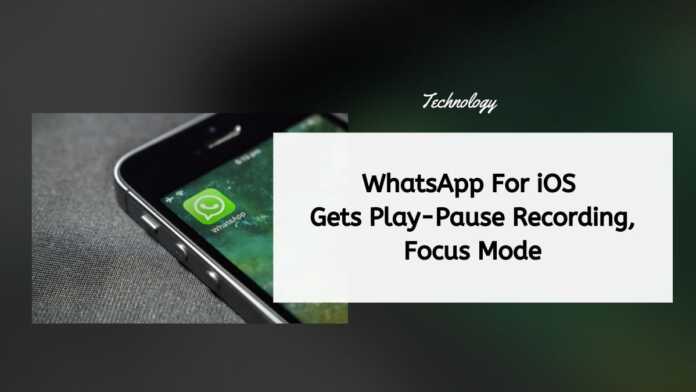 WhatsApp for iOS has been updated with the ability to let you pause and resume while recording voice messages. This comes as an extension to the recently introduced voice message preview feature that allows users to review their voice message recordings before sending them to contacts.

The updated WhatsApp also brings support for Focus mode which is a part of iOS 15. The new features are currently available to select iPhone users, though they will roll out to all eligible consumers over the coming weeks.

You can try out the new WhatsApp voice message experience by swiping up to lock your voice recording and then tapping the pause and resume buttons. The ability to pause voice message recordings was first spotted in October last year. It was, however, not available to WhatsApp users up until now.

It is also important to note that the updated experience is currently exclusive for iPhone owners as users on WhatsApp for Android are still not able to pause and resume their voice message recordings.

By allowing users to pause and resume their voice message recordings, WhatsApp has taken another step to refine the voice message experience on its app. The company owned by Facebook parent Meta previously brought features including playback speed and waveforms for voice messages to help users send voice messages.

The second change that the updated WhatsApp for iOS brings to users is support for the Focus Mode. This will allow users to consider getting messages from selected users even when they don’t want to be disturbed with regular notifications.

WhatsApp for iOS through the latest update has also started displaying group and profile photos alongside notifications each time you get a new message. This is similar to how you are seeing profile photos of people sending you direct messages on Twitter. It was also spotted by WhatsApp beta tracker WABetaInfo just earlier this month. The feature is also limited to users on iOS 15 and later versions.

The first feature of the year is available to some iOS beta testers on iOS 15 today.https://t.co/erfvZ90ZrV

You can download the updated WhatsApp for iOS on your iPhone through the App Store. The app is compatible with devices running on iOS 10 and later. It is also 212.6MB in size.