WhatsApp Feature To Warn You Before Junking View Once Messages

This feature provides just a 14-day notice period before junking the View Once messages on your Android smartphone. 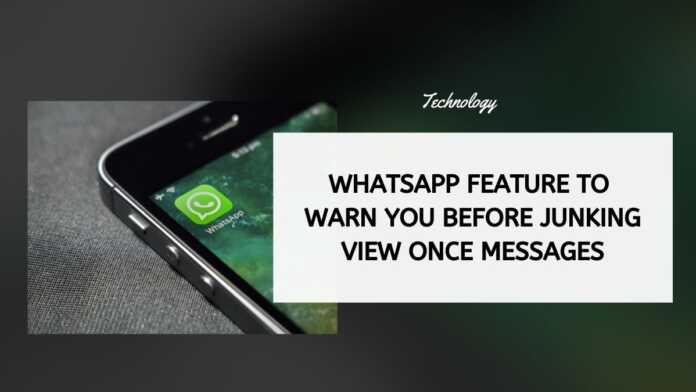 WhatsApp has been working on its View Once feature for quite some time now. As per reports, the Facebook-owned messaging app has started rolling out this feature to the beta users of its Android app.

If you are a beta tester, you will easily get this feature by downloading WhatsApp beta for Android version 2.21.14.3 on your Android smartphone. Now, a new report talks about the improvements that Facebook has rolled out to this feature.

WhatsApp’s upcoming View Once feature enables users to send ephemeral messages that disappear once a user has seen them. WhatsApp users can share text messages, photos, and even videos using this method.

Another thing that you need to know about this feature is that these messages won’t stay in a recipient’s inbox forever if they don’t open it. As per reports, if a user doesn’t open a View Once message within 14 days, the message will expire and won’t be accessible to the recipient anymore.

A recent report by WABetaInfo says that WhatsApp will notify users if a message that they received with the View Once feature has expired. The blog post said that WhatsApp is giving clarity to its users about an expired View Once message by introducing a warning system.

“Photo expired. This photo has expired, please ask (sender’s name) to resend it,” is the in-app notification that users will see if they tap on a photo that has expired already. The messaging app will show a similar message in the case of videos shared using this method.

This update is compatible with WhatsApp beta for Android version 2.21.15.11. It is expected to be available to all Android beta testers of the app in a future update.