WhatsApp Disappearing, ‘View Once’ Feature Rolled Out To Users

WhatsApp view once feature ensures your sensitive photos and videos get deleted after one view. 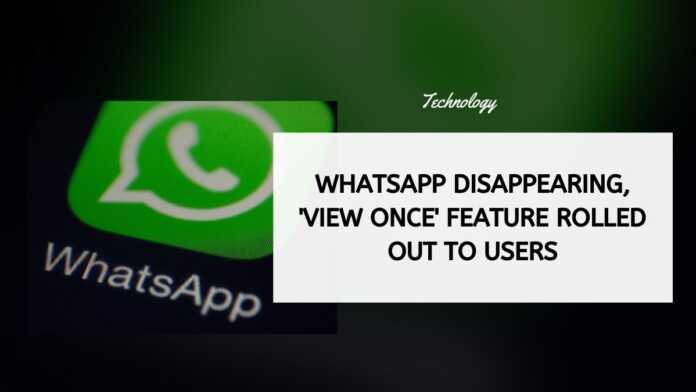 WhatsApp is rolling out a new ‘View Once’ feature for disappearing images to all users on the app. In a blog post, Facebook explained the reasoning behind the new feature.

While the company does mention that the feature is aimed at improving user privacy by getting rid of messages after a certain period automatically, there’s another reason why WhatsApp introduced this feature – keeping your phone tidy.

While taking photos and videos has become more commonplace simply due to mobile phones getting smarter, the company says that these images can take up space on your phones and clutter up your camera roll.

This can lead to storage management issues later, where you might have to sift through hundreds or thousands of photos and videos and then remove them. These can be as innocuous as items on your grocery shopping list or clothes at the mall or something that is much more sensitive.

On WhatsApp, if you send a disappearing message, you will get to see a ‘View Once’ icon on the media. When you receive the media, the preview won’t show up. After you have viewed it once, you won’t be able to open it again, just like Snapchat, Instagram, and Facebook Messenger.

“After the media has been viewed, the message will appear as “opened” to avoid any confusion about what was happening in the chat at the time,” the company states.

WhatsApp says the feature is coming to all users this week itself – so, if you haven’t received it yet, it is only a matter of time before it rolls out to your device.