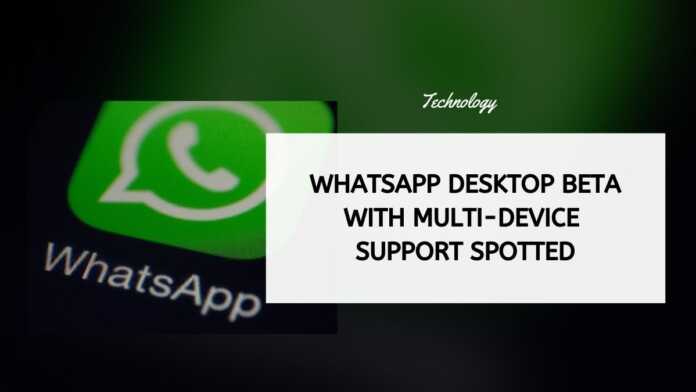 WhatsApp will let you connect your account on up to four devices, but it includes only one smartphone. The other three devices will be WhatsApp Web, WhatsApp desktop and Facebook Portal. The beta version of WhatsApp’s desktop app with multi-device support has now been spotted, and it’s expected to roll out soon.

WhatsApp’s multi-device program has been in the works for quite some time. The purpose of this feature is to let you use WhatsApp on your linked devices without an active internet connection on the main device.

The Facebook owned app currently offers beta versions of its Android and iOS apps. Users who are on WhatsApp beta for Android and iOS can experience unreleased features that are in testing.

WhatsApp is working on beta versions for its web and desktop applications as well. WABetaInfo has now spotted the WhatsApp desktop app in beta. It will be available when WhatsApp will open up the multi-device beta program for Android and iOS users.

Once you’re enrolled in the WhatsApp multi-device beta program, your WhatsApp desktop app will automatically be updated to the beta version.

When your WhatsApp desktop app is updated you will see “BETA” written on top indicating that you are currently running the beta version. This will also allow you to use WhatsApp desktop without an internet connection on your main phone.

There are few things to note about getting this WhatsApp experience. You will need to use the latest beta version of WhatsApp for Android and iOS.

WhatsApp will ask you to test the first version of the multi-device beta program. If you do not meet this requirement then you won’t be able to experience WhatsApp’s multi-device program. WhatsApp is expected to make this feature available to beta testers soon.