The ability to pause voice recordings was introduced on WhatsApp beta for iOS in October 2021. 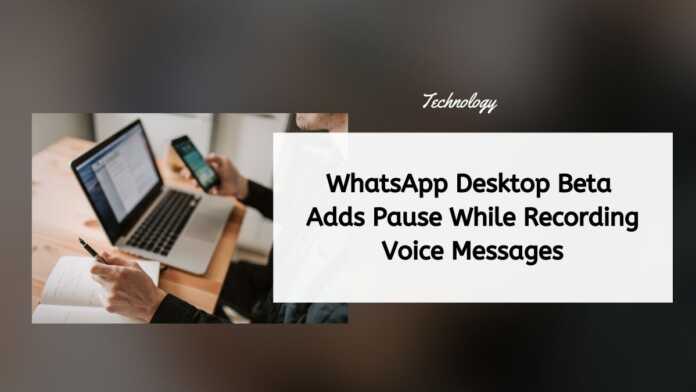 WhatsApp is working on a feature that allows users to pause and resume voice recordings on the desktop version of the app. The instant messaging service recently rolled out the ability to review voice notes before sending them.

The latest beta version of WhatsApp Desktop is now testing the ability to pause and resume voice recordings while they are being played in a chat. The feature is currently available on WhatsApp for iOS but is yet to make its way to the Android version of the app.

A new pause button was spotted by WhatsApp feature tracker WABetaInfo, on the latest beta version of WhatsApp Desktop. The pause-and-resume function allows users who have recorded a voice note to pause and resume playback while they review their recording.

Users will then be able to discard the recording or continue recording. The pause button has replaced the older stop button which would mean a user would have to listen to the entire voice recording from the beginning.

According to WABetaInfo, the feature is currently being tested on WhatsApp Desktop beta 2.2201.2, based on user reports of the feature rolling out on the latest beta version. The pause button appears to be functional, but the feature tracker notes that it may take a while to be enabled for beta testers’ accounts.

WhatsApp for iOS already enabled the same ability to pause voice notes after recording them in beta version 2.21.230.16 in October 2021, while the Meta-owned messaging service is yet to introduce the feature on the WhatsApp beta for Android smartphones.

Apart from that WhatsApp recently introduced an in-app support feature that was briefly tested last year. The feature, which is in beta testing, will provide users with support via a chat with the verified WhatsApp account.

The feature was spotted in a recent beta version of WhatsApp for iOS and Android and is expected to roll out to users at a future date. WhatsApp is also testing new animations for heart emoji, to match the red heart animated emoji on the latest WhatsApp beta version 22.2.72 for iOS users, according to the feature tracker.