This WhatsApp feature keeps the archived conversations on the app away from the user. 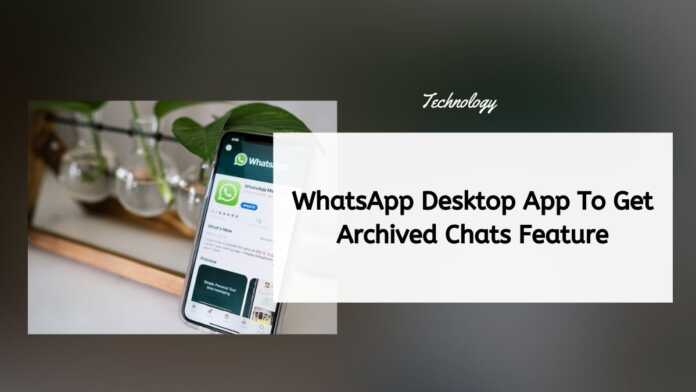 WhatsApp desktop app to get the archived chats feature which the company rolled in July this year. This new feature enabled users to focus on their important conversations in their inbox by taking away the focus from the old conversations that they would want to ignore.

This WhatsApp feature keeps the archived conversations on the app away from the user even when a new message arrives in one of the chats. It has helped take a lot of bother away for users. Now, reports suggest that the WhatsApp desktop app is likely to get this same Archive feature, according to a report by WABetaInfo.

In fact, the messaging app has started rolling out the new feature to the WhatsApp desktop beta mode. This new feature brings the New Archived folder to the top of the users’ chat list.

This Archived chat folder, as the name goes, holds all the chats that the user has archived. One good thing about this Archived folder is that all the archived chats will remain hidden inside this folder even if a new message is received.

The blog site says that the company is developing this functionality in a way that it also works when the WhatsApp multi-device functionality feature has been rolled out. This means that no matter which device you are using to access WhatsApp, all your archived chats will remain archived, even when accessing WhatsApp from your PC.

The news that WhatsApp is working towards developing a new Archive feature for its desktop-based app came shortly after the blog site reported that the messaging app had introduced a beta program — just like the one that is available for WhatsApp’s Android and iOS-based apps – for Whatsapp web app as well.

WhatsApp users can join the WhatsApp Desktop beta program by installing the beta version of the app on their Windows PCs and macOS-powered PCs.