Facebook-owned messaging app has finally enabled the feature in its Android beta app. 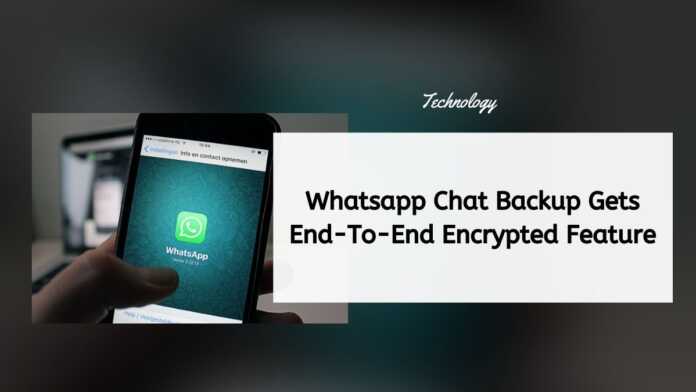 WhatsApp offers end-to-end encryption to safeguard chats on its platforms. However, this feature is not extended to WhatsApp chat backups that are stored on Google Drive for Android users and iCloud for iPhone users.

WhatsApp last month announced that soon it will be rolling out end-to-encrypted chat backups on its platform. At the time, the company had also said that WhatsApp users will have to opt-in or enable this feature and that it will be available in its Android and iOS-based apps in the coming weeks. Now, we finally have an update in this regard.

WABetaInfo reports that end-to-end encrypted feature for Whatsapp chat backups had been temporarily enabled on its Android beta app, but it was later disabled in WhatsApp beta for Android version .21.15.7. However, now, the Facebook-owned messaging app has finally enabled the feature in its Android beta app.

“In order to protect your backup using end-to-end encryption, you can choose a personal password or a 64-bit encryption key,” the blog site wrote in a post.

Do read the warning before you enable this WhatsApp feature. The screenshots shared by the blogsite show that the encrypted backups cannot be restored by WhatsApp if users lose the key as the company doesn’t have access to it.

The 64-digit encryption key or the password that users set is the only way to get access to the chat backups. “Note that WhatsApp cannot help you to restore your chat history from an encrypted backup if you lose the password, so be sure to save it in a safe place,” the blog site added.

Additionally, the report says that while WhatsApp has rolled out this feature for all users who are using WhatsApp beta for Android, it is possible that some users have not received the update. Such users will get the end-to-end encrypted chat backups with the next update.

While there is no set deadline on the final availability of WhatsApp’s end-to-end encrypted chat backups, but with the feature already being available in the company’s beta apps, availability in the main apps shouldn’t be far behind.