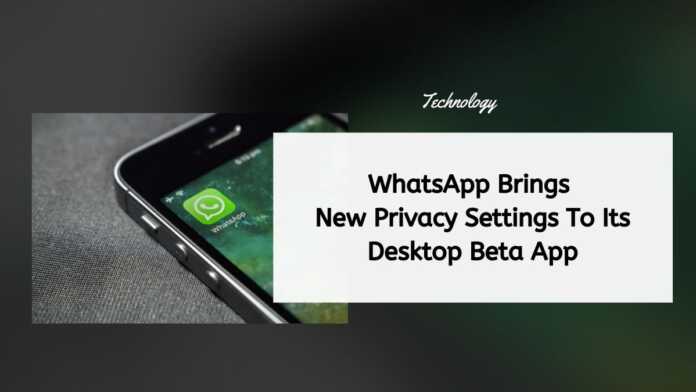 WhatsApp recently announced a new beta program for its Desktop-based app. After that, the messaging app has been trying to introduce new features to the platform.

People who have used WhatsApp’s Desktop-based beta app would know that the app didn’t have privacy settings. This means that users of WhatsApp’s Desktop beta app couldn’t control the settings of the app from the Desktop app and they had to turn to their smartphones – even in the multi-device mode – to make changes to the messaging app’s interface.

Now, WABetaInfo reports that WhatsApp, with its latest beta update to its messaging app, is rolling out privacy settings to its Desktop-based beta app. The blog site says that the WhatsApp Desktop beta 2.2146.5 update brings privacy settings to WhatsApp beta for the Desktop app.

As per the screenshot shared by the blog site, users can control privacy settings pertaining to the Last Seen, Profile Photo, and About sections of the app. In addition to that, WhatsApp users can also control Read Receipts using the click of a button, manage blocked contacts, and access group settings once they have downloaded the latest beta version of the app on their smartphones.

In the same screenshot, WhatsApp also reminds its users that calls made and messages sent from WhatsApp for Desktop app are covered by the company’s end-to-end encryption technique and that users can use WhatsApp on up to four devices at the same time by using WhatsApp’s new Desktop-based beta app.

Further, WhatsApp has also released the WhatsApp beta for Android 2.21.22.7 update. This update brings Reaction Notifications settings to WhatsApp’s Android-based beta app. The messaging app is already working on a similar feature for its iOS-based app.

With this update, Android users will be able to control if they want to see the reactions to messages that they send to other WhatsApp users.