Messenger Rooms shortcut is available to select users on WhatsApp beta for Android. 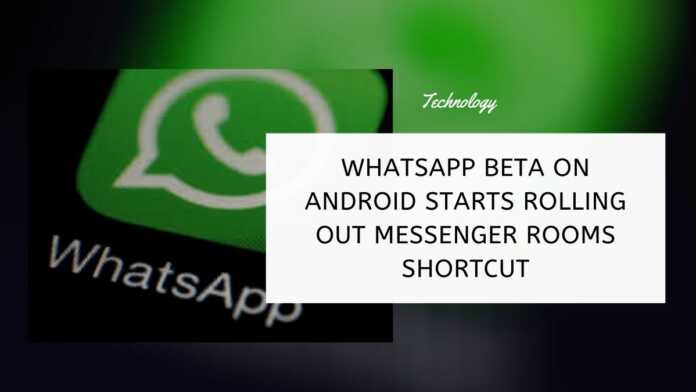 This seems to be a gradual rollout and WhatsApp beta users in the US have started receiving it, according to WABetaInfo. The feature is available on WhatsApp beta 2.20.139.

Facebook while announcing the launch of Messenger Rooms also confirmed its shortcut arriving on WhatsApp and Instagram as well.

This shortcut opens up to Messenger Rooms which is Facebook’s new video conferencing feature. Although a Messenger feature, users who don’t have a Facebook account can also join a call through an invite.

On WhatsApp, the Messenger Rooms shortcut will be visible in the attached file section. If it’s available you’ll see a new ‘Room’ icon replacing the previous camera icon. This shortcut is also visible in the calls tab and group chats.

In addition to the voice/video call icon, you’ll see a new Messenger Rooms icon above it. Also, when you tap the call icon to make group calls there will be an option to “create a room”.

This is not to be confused with WhatsApp’s in-app group video calls. WhatsApp recently increased the group call limit from four to eight people.

Messenger Rooms is a bigger platform with support for 50 people in one call. Like Houseparty, you can create rooms and invite people to join them. Anyone with the room link can join the call, and you can also lock the room.