WhatsApp is rolling out much bolder link previews on the beta version. 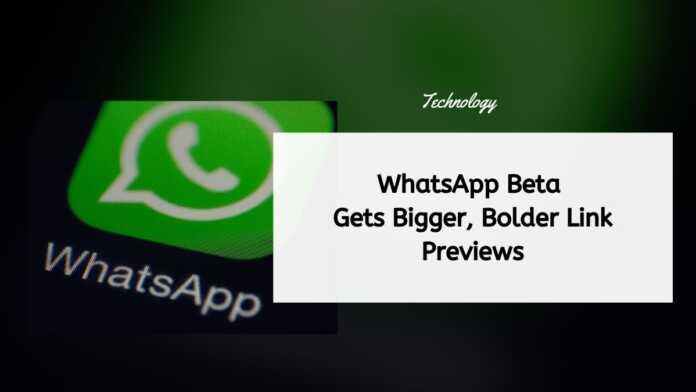 WhatsApp is rolling out a trivial feature that could have a big impact on how users share links on WhatsApp. In July, the messaging app was reported to have been working on implementing bigger link previews.

The folks over at WABetaInfo revealed the then-upcoming feature and what the devs have in store for us before the features are made public. This WhatsApp feature is now being rolled out.

If you are on the stable version of WhatsApp, you must have noticed that the app squishes previews of the links into a tiny thumbnail and it takes four to five lines. However, that’s changing now.

In a bid to be more like Telegram, the shared links on WhatsApp beta now appear bigger and bolder. It displays more text and a larger image. Hence, giving you a better idea about the shared link.

As per a new report, the updated image previews are now rolling out to beta versions of WhatsApp on both iOS and Android. You will see the difference if you’re running iOS version 2.21.160.17 or Android version 2.21.17.15.

The company has released several new features. The latest one allows users to switch platforms – from Android to iOS or vice versa. Previously, there was no way to move your chat history from one system to another. Now, you can use the Smart Switch feature to backup your chat history and files and transfer them to any new phone.

Moreover, the company recently introduced support for multiple devices on the web. You can use the service on multiple PC and laptop computers without having to mirror from your smartphone.

Another one of the latest features includes View Once. If you use this feature, the photos and videos you send will be deleted straight after being opened and viewed.