WABetaInfo has revealed that the company will finally be rolling out this WhatsApp feature soon. 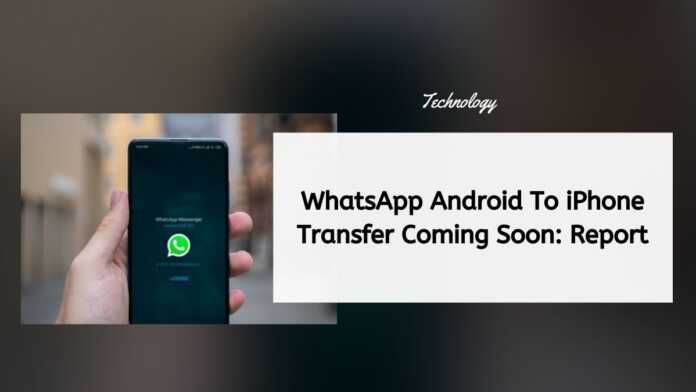 WhatsApp has been working on bringing a new feature to its platform that would enable users to move their data. Reports in the past have indicated that the company is working on a detailed guide that will help WhatsApp users to transfer their data from iOS to Android and it was made possible recently. Now, word is that WhatsApp Android to iPhone transfer will be rolled out soon too.

According to a report by WABetaInfo, WhatsApp is working on a feature that will enable its users to transfer their chat data from Android to iPhones.

As of now, when a smartphone user migrates from Google’s Android platform to Apple’s iOS, all of their WhatsApp data, which includes their text chats, all the links that they have shared, and all the videos and images that they have, are lost.

However, WhatsApp’s upcoming feature changes this by letting users migrate their chats and media from WhatsApp’s Android app to WhatsApp’s iOS app.

A screenshot of the feature shared by the blog site gives us a glimpse of the WhatsApp Move Chats to iOS feature. The screenshot shows that WhatsApp users will be able to transfer their ‘chat history and media to their new iPhones’.

They will have to tap on the Start button under the relevant settings to begin the process. Apart from this, WhatsApp users will also be able to cancel the process or transfer their WhatsApp data to another mobile number.

Furthermore, the blog site says that while WhatsApp Move Chats to iOS feature is still under development, it will probably need a cable to complete the process. Also, when the feature is released on the beta version of WhatsApp’s Android-based app, it will not be restricted to Samsung smartphones as in the case with the recently released functionality that enables iPhone users to transfer their WhatsApp data to Samsung smartphones only.