A person familiar with Uber’s deliberations described a threatened shutdown in California as a “nuclear option” that would only be used as a last resort. 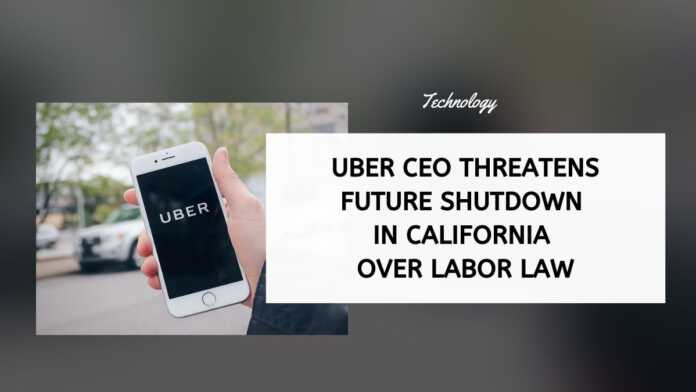 Dara Khosrowshahi, chief executive officer of Uber Technologies Inc., threatened to temporarily shut down service in California if it loses a drawn-out fight over a state law seeking to reclassify contractors as employees.

Before then, Uber will continue a lengthy political and legal battle it has been waging since before the law was enacted this year.

The company said it will appeal a court ruling Monday saying it must reclassify drivers as employees, and then it will ask voters in November to overturn the law.

Many regular drivers are hoping to secure the same health and unemployment benefits afforded to other workers in the state. But Uber has said the labor law threatens to shut down the entire gig economy by substantially raising companies’ expenses.

A person familiar with Uber’s deliberations described a threatened shutdown in California as a “nuclear option” that would only be used as a last resort.

Khosrowshahi made his comments in a television interview Wednesday on CNBC. “If the court doesn’t reconsider, then in California, it’s hard to believe we’ll be able to switch our model to full-time employment quickly,” he said.

Uber is asking the judge who issued the injunction to hold a hearing on Thursday for Uber to request that Monday’s order be put on hold for the duration of the appeals process, according to a filing in San Francisco state court.