Twitter To Highlight Tweets That Mislead Users On Covid-19 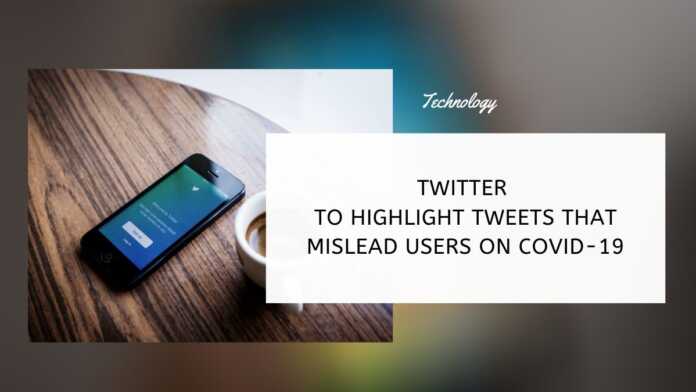 Twitter announced in a blog that it will be putting up labels and warnings on Covid-19 information that’s potentially harmful, misleading, and fake.

The move is an extension of Twitter’s policy guidance, which was announced in March, to “address content that goes directly against guidance on Covid-19 from authoritative sources of Global and local pandemic”.

“Moving forward, we may use these labels and warning messages to provide additional explanations or clarifications in situations where the risks of harm associated with a Tweet are less severe but where people may still be confused or misled by the content,” the Twitter said in a blog post.

The labels on the tweets will link to a page Twitter curates or “external trusted sources” to provide additional information about the claims that have been made in the tweet. “These warnings will inform people that the information in the tweet conflicts with public health experts’ guidance before they view it,” the post said.

Misleading information covers “statements or assertions that have been confirmed to be false or misleading by subject-matter experts, such as public health authorities”.

Disputed claims cover “statements or assertions in which the accuracy, truthfulness, or credibility of the claim is contested or unknown”.

Unverified claims include “information (which could be true or false) that is unconfirmed at the time it is shared”.

Twitter said that they will be relying on internal systems along with its fact-checking partners to identify content that is “likely to result in offline harm”.

“Given the dynamic situation, we will prioritize review and labeling of content that could lead to increased exposure or transmission,” Twitter said.

Twitter is issuing yellow, orange, and red labels for these misleading tweets for now. These categories will determine what action Twitter will take regarding the concerned tweets.